Girl, six, gives hair towards wig for children with cancer 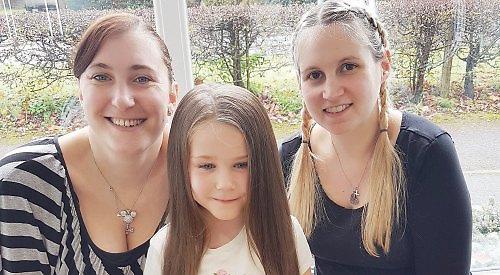 A SIX-year-old girl has donated her hair to be made into a wig for children undergoing cancer treatment.

Jasmine Allwood had 1ft of her locks cut off at Kimberley’s Hair Studio in Wood Green, Woodcote, which is run by her cousin Kimberley Russell.

This will be donated to the Little Princess Trust, which will fashion them into a hairpiece for young chemotherapy patients.

Jasmine has also raised more than £360 in sponsorship from friends and family, which will be donated to Great Ormond Street Hospital for children in London.

The youngster, who attends Thameside Primary School in Caversham, came up with the idea while on a family holiday in Disneyland Paris with her mother Sam, father Roger and eight-year-old brother Jordan in December 2015.

The family, from Reading, were having breakfast when Jasmine noticed a girl of a similar age who had no hair and asked her parents what had happened to her.

Mrs Allwood said: “We just said she was poorly because at that age it’s very hard to explain properly. Jasmine then immediately asked, ‘well, can I give her some of my hair?’

“I said there were charities that allow you to do that and she said she wanted to grow her hair so she could donate it. We said it was a good idea but didn’t make much of it because we thought she’d just forget about it.

“However, a few weeks afterwards she brought it up again and we realised she was serious so we looked up the Little Princess Trust and showed her how she could help.

“She was very focused after that and never once had any second thoughts about it. As she has got older, we’ve been able to explain a bit more about cancer and how some children have special medicine to make them better but that hair loss is one of the side effects.

“We trimmed the ends of her hair from time to time to keep it healthy but other than that she just let it grow until it was below her waist.

“She couldn’t wait to have it cut and kept asking ‘is it today?’ in the days running up to it.

“It’s still shoulder-length so she shouldn’t have any problems being cold over the winter.

“The school has been very supportive and her brother is very proud of her. I’m not sure what Jasmine’s friends think as they’re still pretty young but we’re so incredibly proud of her and can’t put into words how amazing it is that, at such a young age, she stuck to her guns for nearly two years.

“Most children would have forgotten or lost interest but she never forgot what she was doing or why.”

Mrs Russell, from Mapledurham, said: “It’s brilliant that a girl that young was interested in doing this.

“Importantly, no one has put any pressure on Jasmine — it was her idea from the start and she has been really keen. We had to keep telling her to hold off and wait until there was a good amount.

“She was so excited and says she wants to do it again so that she can help as many people as possible, which for a six-year-old is incredible.”