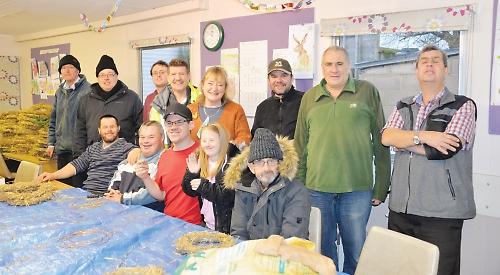 A WOMAN dedicated to improving the lives of disabled adults has been honoured by the Queen.

Frances Woolaway, 58, of Winterberry Way, Caversham, received a British Empire Medal in the New Year’s Honours for her work with the Ways and Means Trust.

The charity, which has been based at Manor Farm in Peppard since 2014, teaches disabled adults life skills and celebrates its 50th anniversary this year.

Mrs Woolaway (née Hill) is chief executive of the charity, for which she has worked for almost 20 years.

She also received the honour for her community work in Caversham, where she has lived for most of her life.

She chairs the Caversham Court management committee and is a member of Reading Abbey Rotary Club and used to be an active member of Caversham Traders’ Association.

Mrs Woolaway said: “It’s a huge honour to be recognised for the charity and for the things I have done in the place where I live.

“I believe it’s important to get stuck in and do things in your neighbourhood.” She grew up in Caversham with parents Bob and Margaret Hill. Her father was a master butcher, who owned five shops in Oxfordshire and Berkshire, while her mother worked for Selfridges.

She attended Caversham Primary School and was among the first intake of students at Highdown School in Emmer Green.

In her teens she worked part time for Marks & Spencer before getting a place on the John Lewis Partnership management trainee scheme after finishing school.

She worked there for a decade before moving to Canada and working for recruiter Manpower as a quality services manager.

When Mrs Woolaway returned to the UK she settled back in Caversham with her husband Steve to be closer to her parents.

She continued to work for Manpower as a training manager before joining the Ways and Means Trust. Mrs Woolaway said: “I was approached by the former chief executive. I was told they could not pay me much but it would be a lot of fun.

“I’ve never left because I have had so much fun.”

The charity was founded by Dr David Duncan, a consultant psychiatrist at the former Borocourt Hospital near Peppard, to help the rehabilitation of patients with mental health issues.

It was originally based at Huntley and Palmers in Reading before moving to Caversham in the Seventies. It opened Greenshoots, a horticultural therapy unit, at Manor Farm in 1997.

The charity also has a packaging operation, a cleaning company and a canteen teaching unit.

Mrs Woolaway said: “Working with disabled adults, many of whom have had a rough start in life, I am able to live through their successes. It’s so rewarding.

“We want to give the adults we work with motivation to get up in the morning and to feel they have a purpose.

“People learning to write their name, which might seem a small thing, can take them months or years, so helping them is wonderful.”

Mrs Woolaway was a member of the Rotary Club of Caversham, which disbanded four years ago so she joined Reading Abbey Rotary Club and is now a junior vice-president.

She also helps run the tea kiosk at Caversham Court gardens, which is open from March to October and is used by multiple charities, including the Ways and Means Trust, to fund-raise.

Mrs Woolaway said: “It is and has been a privilege to live and work in such a lovely place as Caversham and feel part of the community. I hope I have given something back and have helped to keep the community going.”

• Actor Hugh Laurie, who competed at Henley Royal Regatta three times, was made a CBE for services to drama. In 1980 he and James Palmer were runners-up in the Silver Goblets and Nickalls’ Challenge Cup for coxless pairs at the regatta, representing Eton Vikings Rowing Club. Laurie, who is 58, was born and grew up in Oxford. His father Ran was president of Leander Club in Henley in the Seventies.