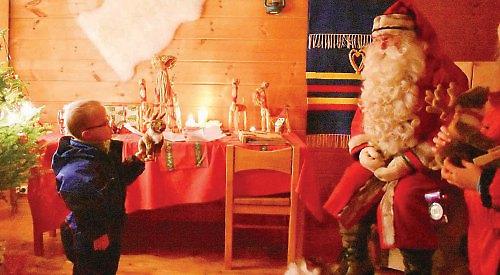 A YOUNG boy enjoyed a family trip to meet Father Christmas in Lapland after completing two years of cancer treatment.

He was accompanied by his parents John and Nicole and siblings Adam, two, and twins Isabella and Finley, seven, who live in Charlotte Close, Caversham. They were joined by Mr Marsh’s mother Angela, from Peppard.

The children were able to deliver their Christmas wishes to the man himself. James asked for a toy train, which duly arrived on Christmas Day.

During their stay, the family stayed in a log cabin and took part in wildlife safaris across the Finnish countryside pulled by reindeer and huskies. They also saw the Northern Lights and rode a sleigh across a frozen lake.

It was their first trip abroad since James finished undergoing chemotherapy for acute leukaemia on December 5.

The family were invited after his sisters wrote to Father Christmas explaining what James had been through.

He was diagnosed in 2015 when he developed pain and weakness in his legs. Following a blood test, he was rushed to the John Radcliffe Hospital in Oxford for immediate treatment.

James, who is in reception class at Caversham Primary School, had intravenous doses and spinal infusions of various drugs several times a week for a year, which made him sick and caused his hair to fall out.

He also had to take steroids and have regular blood and platelet transfusions to top up his healthy cells.

He then underwent another year on a lower dose after which a bone marrow test confirmed he was free of the disease.

Mrs Marsh said: “James loved his trip and was very impressed that he met Father Christmas. He was extremely happy and almost couldn’t believe it that Santa had invited him because he’d been so brave.

“He enjoyed the husky ride as he loves nature. From the moment he arrived, he was awestruck by everything he saw and was admiring the beautiful scenery in immense detail.

“We wouldn’t have been able to travel before because we couldn’t stay far from a hospital in case he became sick. His immunity is still low but he was no longer at serious risk so we just had to take some antibiotics with us in case.”

After returning to Caversham, the family enjoyed spending Christmas Day with relatives.

Mrs Marsh said: “James was very excited when he saw all the presents and was fascinated by the idea of Santa coming down the chimney to deliver them.

“I think his favourite thing was putting out a mince pie on Christmas Eve. It was a lovely day, although the girls got a bit frustrated as he wanted to open his presents and play with them one by one whereas they wanted to open them all at once!”

The family are feeling positive about the future and James is visibly improved.

Mrs Marsh said: “It has been a bit difficult for James to truly grasp that it’s completely finished because he has been undergoing treatment for half of his life but he’s getting stronger all the time and, while he has always been a happy boy, he’s becoming even happier.

“He’s more energetic and the girls are excited because he can now go in the pool in the summer.

“James is very happy at school. He actually wanted to go back before the Christmas holidays were over! Everybody knows him and the children are all very accepting of him — he’s very popular.”

Mr Marsh said: “It’s great that the treatment is finally over.

James has really taken it in his stride — although it was hard initially, he became very matter-of-fact, even though it would have been incredibly upsetting for many other children. One time when he was sick he just started cleaning it up himself because he’d got so used to it that he was no longer fazed.

“It has been a process of adapting to noise and crowds because he was in isolation for so long — we recently went to a soft play session and it was all a bit much for him.

“However, he has settled well at school and knows the names of his friends and teachers so he’s happy.”