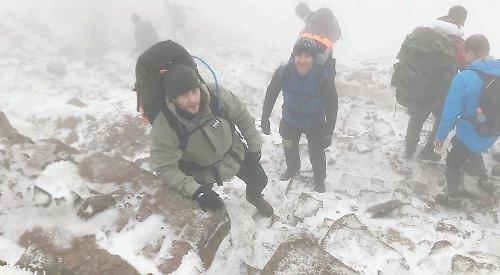 A MAN helped raise more than £30,000 for charity by taking part in a gruelling fitness challenge devised by the Special Air Service as part of its selection process.

Rob Teasdale, a builder and carpenter, scaled Pen y Fan, a 2,907ft peak in the Brecon Beacons, twice in five hours while carrying a backpack containing his food rations, a water bottle and 35lb of weights.

He was one of about 200 people who took part in the event, known in the forces as the “Fan Dance”, in temperatures as low as -14C and winds of up to 80mph.

He was part of a 16-strong group of men and women raising money for Macmillan Cancer Support and the Basing ward at Basingstoke Hospital, where a friend’s wife is having cancer treatment. On the day they got up at 6am and ate a breakfast of porridge and bananas before setting off at 8am, accompanied by a team of former servicemen who acted as guides and medics.

The climbers first went up the western slope, known as Corn Du, by alternately jogging and walking then descended on the opposite side via a path known as Jacob’s Ladder following an old Roman road to the foot.

They then had a packed lunch before turning around and completing the same route in reverse.

The upper slopes were covered in ice and as they neared the top on the first ascent Mr Teasdale slipped and twisted his knee, which aggravated his earlier injury.

He considered pulling out once he reached the bottom again but decided to continue. However, the rest of the group undertook the march twice more — once later that evening and again the following morning.

Mr Teasdale had planned to complete the challenge twice more too but was advised against it because of his injury.

He said: “We had to do a massive amount of training as it’s very different from going to the gym and doing shorter bursts of intense exercise.

“This was well outside our comfort zones as it was more of a long slog with a very heavy backpack and a test of our endurance.

“Conditions on the day were pretty tough, especially at the top, and one of the instructors said it was the worst they’d seen for about 15 years.

“We had to keep moving as it was so cold that when I stopped for a second to take some painkillers the sweat on my fleece began to freeze.

“It was dangerous and extremely hard but I managed to keep my footing on the ice by taking baby steps and keeping my eyes on the ground at all times.

“You couldn’t take your eyes off or you’d fall straight over — there were people falling left, right and centre.

“It was for such a great cause that I never lost my motivation. It was very emotional once we’d all completed it because we’d put in so much effort in over the months and this was the end result of it.

“We just went back to the house we’d rented to eat and chill out, although we did open a bottle of champagne.

“I really enjoyed it and I’m really pleased with the money we raised.”

He could be joined by his partner Eszter Orban, who trained for this challenge but pulled out due to injury.