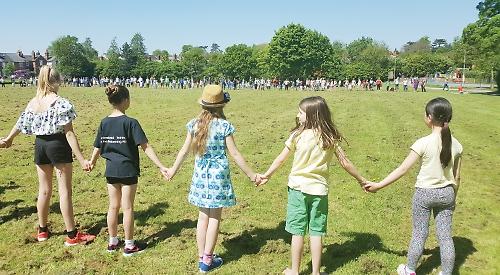 MORE than 100 residents held a community picnic on part of a recreation ground which could be fenced off for use by a school.

The Heights Primary School wants to expand its temporary site off Gosbrook Road, Lower Caversham, and use more than 2,000 sq m of the adjacent Westfield Park for pupils to play in.

Timber or steel railings would be used to segregate the area during school hours but the newly formed Friends of Westfield Park are opposed to the idea.

The group organised a picnic as part of a campaign against the proposal before it is considered by Reading Borough Council.

A spokesman for the Friends of Westfield Park said: “We were delighted to see the park in glorious sunshine being enjoyed by the whole community at our peaceful picnic. This strong show of unity demonstrates the strength of feeling against these expansion plans, particularly the annexation of Westfield recreation ground.

“In the four years since The Heights took up its temporary home, we have had to put up with a marked increase in noise, parking problems and traffic and the saturation of our play park which already serves two other local primary schools.

“This planning application shows no regard for the stress our community is already under as a result of their tenure and a planned expansion can only make this worse.”

The free school already has an arrangement with the neighbouring St Anne’s Primary School to use part of its playing field for informal play at lunch times and break times but this is no longer enough as the school roll is increasing.

The Heights is being forced to expand in order to take pupils until August 2020 as it awaits a proposed move to a permanent site. Plans for the new school on Mapledurham Playing Fields in Caversham Heights were all but approved last month following a four-year campaign which divided the community.

The school says the railings will be removed and the grass area fully reinstated when it does finally move. The proposed extension involves building a two-storey, six classroom modular unit on part of the St Anne’s site, which would take up 990 sq m of its playing field.

Karen Edwards, headteacher at The Heights, says the school will do everything it can to minimise its use of Westfield Park to school hours only for the short time until it is able to move.

Reading Borough Council says the school’s use of the area would be 25 minutes for a mid-morning break and an hour for lunchtime play. It would also be used for a two-hour PE lesson on Mondays and Wednesdays.

A spokesman said: “The area would be fully accessible to the public as usual outside these hours and no footpaths through the park would be affected.”

A decision on the plans is set to made by the council’s planning committee on Wdnesday.