Sandwich shop friends spread out on their own 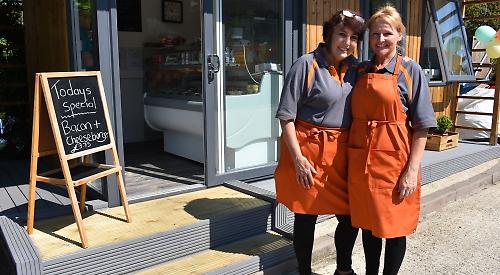 TWO friends who met while working at a sandwich shop have opened their own business in Henley.

The Café, as it is known, sells food and drink including burgers, sandwiches, cakes and smoothies.

The pair previously worked together for about two years at Church Street Baguettes in Caversham before Dawn left three years ago.

The pair continued to meet up on Lorrie’s day off on Wednesdays before she too left after being diagnosed with multiple myeloma, a type of bone marrow cancer.

Lorrie, 60, who lives in Rotherfield Greys with husband Glynn and son Kevin, underwent treatment at the Royal Berkshire Hospital.

Her friend often picked her up from hospital appointments and would spend the day with her.

Dawn, 50, of Gravel Road, Binfield Heath, with her daughter Hope, 10, said: “When Lorrie was diagnosed we spent every day together. She’s a lovely person and we have a fantastic friendship.

“A year ago when she went in to remission we started talking about the future and because we’d worked together we thought we’d try it ourselves.

“It was a throwaway remark at first. We looked at a place in Caversham to start the business but it wasn’t viable.

“Then someone mentioned Henley Self Storage and when we went down there we realised there was no one there doing what we wanted to do.”

Despite originally being turned away over fears about parking, the women persevered and were finally given approval to open the café by Darren West, of Henley Self Storage. Dawn said: “He had a rethink and came back to us in May last year so it has taken us exactly a year to open.”

The café cost about £15,000 to set up, which included the construction of a small wooden hut in the car park of the business park.

The women, who will be helped at the shop by their friend Kay Brothers, will use local produce and everything will be home-cooked and freshly made.

As well as baguettes, paninis and wraps, the café also does daily specials including burgers, curry, spaghetti bolognese and breakfast boxes.

The women hope to work closely with other businesses on the estate, including a fitness centre and hairdressers.

Dawn said: “Everything is homemade and fresh. We source locally and use Jennings butchers in Caversham.

“Lots of people are coming in for our hot food. We are really pleased.”

Lorrie added: “There was nothing else down here serving food. So far so good — we’ve sold many smoothies.”

Dawn knows what she would recommend to any new customers: “My favourite dish is definitely Lorrie’s cajun chicken.”