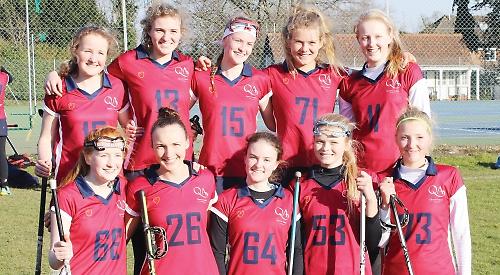 IT’S not uncommon for sporting prowess to run in the family but a lacrosse team from Caversham has taken this to the extreme.

The first team at Queen Anne’s School has no less than five sets of
sisters.

Georgina and Lucy Evans, Katie and Rachel Green, Bella and Millie Bowater, Ella and Evie Harris and Alice and Emily Oram make up 10 of the side’s 17 players.

And with 12 players from a side on the field at any time, it’s not unusual for all five sets of sisters to share the pitch at once.

Georgina, 18, lives in St Mark’s Road, Henley, with Lucy, 16, and their parents Jonathan and Sally and brother Benedict, 20.

She says: “I really like it because you can share the experience on the pitch and we get on quite well.

“It makes it also easier for our parents to watch!

“Because we’ve practised with each other before joining the team we know how each other plays so that makes it easier.”

Emily, 16, lives in Chalkhouse Green with Alice, 17, and parents Andrew and Philippa.

She says: “It’s nice and helps with the atmosphere of the team.”

Alice adds: “When we are playing against each other we aren’t allowed to mark each other in case anything happens. Emily is better — she plays for England.”

She says: “People say sisters know each other better but there is good stuff and bad stuff.

“If your sister makes a mistake you feel like you can say something you wouldn’t say to a friend.”

Bella, 18, lives in St Mark’s Road, Henley, with Millie, 16, and their parents Justin and Jacinta.

She says: “In lacrosse you need to be quite direct when you are telling people what to do and you can’t take that to heart. I can tell my sister what to do and she won’t take offence. Millie knows I’m better out of the two of us but she still tries to one-up me!”

Rachel, 16, and Katie, 18, who live in Harpsden with parents Tim and Elizabeth, sister Emily, 21, and brother Andrew, 20, play a range of sports together.

Rachel says: “There’s definitely a rivalry between me and my sister and I’d say Katie is better at lacrosse.

“We’ve been playing for seven years. It’s fun at times when we are teammates but not so much when we are against each other.”

The team made the last eight of a national competition this year, while Bella also represents England at under-19 level.

Georgina, who is also head girl, and Emily have also played in home international matches.

Head of lacrosse Rachael O’Brien says: “They are a really nice group of girls. Because lots of the siblings are friends they have been round each other’s houses and socialised.

“It means they are more confident around the older girls.”