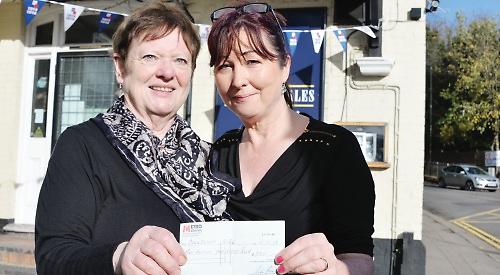 SPECIAL events marking the centenary of the 1918 Armistice were held across the country on Sunday.

But surely one of the most unique took place in a pub following the remembrance parade and service in Caversham.

Regulars at the Prince of Wales in Prospect Street, including residents and former servicemen and women, took on a challenge of drinking 100 pints in 100 minutes for £1 each.

As the pub was bustling with customers, it didn’t take long to polish off the two barrels of Brakspear bitter.

Andrew James, who has run the pub with his wife Jacky for four years, said it took about two hours for all the beer to be sold.

He said: “Because the Caversham Royal British Legion come here for dinner once a month and because of the 100th anniversary, they wanted to do something special.

“I asked Brakspear what they would be willing to do and they gave me the beer.

“Everyone got behind it and lots of new faces came in as well because they had been told there was going to be food laid on.

“There was a really nice atmosphere in the pub. There were lots of people in uniform and a lot of younger people like the cadets as well, so it was a very successful day.”

As well as the £100 raised from beer sales, there was a collection in aid of the Poppy Appeal.

“The community joined in the spirit of everything that was happening and it just seemed like a novel idea to mark 100 years since the end of the First World War. I think they just about finished the cheap beer but they didn’t stop drinking!

“The first barrel was changed in about an hour so I rather think we might have done it in 100 minutes but Andrew will know best.

“There was was a lovely atmosphere and nice selection of people — kids, people in uniform, people from the shops and those who helped who collect for the Poppy Appeal.

“It was nice that people had helped with the appeal, respected the dead at the service and were prepared to remember what it was like when peace was declared — the whole mix was lovely.”

Meanwhile, Mr and Mrs James donated another £250 on the day.

The couple recently won £500 for having the best garden on the Brakspear estate and donated half their prize money to the Legion and the other half to the Teenage Cancer Trust.

Mrs James said: “The Legion is an excellent cause and needs as much support as possible. The branch is very supportive of the pub.”

Mrs Palmer added: “We hold our monthly legion meetings here as well as social events. This is absolutely marvellous.”