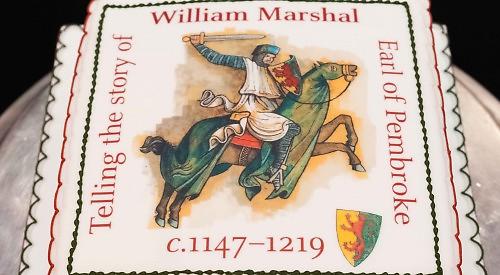 A LARGE illustrated plaque commemorating the life of a medieval knight has been installed on Caversham Bridge.

William Marshal, the Earl of Pembroke, was lauded as the greatest knight who ever lived and it is thanks to his actions while regent to Henry III that the Magna Carta survived.

He married heiress Isabel Clare, which brought him extensive lands, including the Manor of Caversham. He died there in 1219, aged 72.

The plaque tells his story with colour illustrations, including the Earl on horseback with his sword drawn.

The artwork and design are by Martin Andrews and Anke Ueberberg, from Caversham, while Dr Thomas Asbridge, author of The Greatest Knight: The Remarkable Life of William Marshal, the Power behind Five English Thrones, advised on the text, which was prepared by Helen Lambert and Vickie Abel.

The plaque, which is on the lower section of the viewing point of the bridge, is made of enamelled metal to protect against the weather.

It looks towards the area of the early manor across the Thames from Reading Abbey. It was made by A G Wells, from the Isle of Wight, which also made the Caversham Heritage Map by Caversham library.

Caversham and District Residents’ Association, with support from Reading Civic Society, developed the project, which cost more than £5,000 and was funded by donations.

A celebration to mark the installation on was held at the Crowne Plaza Hotel next to the bridge.

Helen Lambert, who chairs the association, said: “We are delighted to be installing the panel during the 800th anniversary year of the death of the great William Marshal in Caversham in 1219. He led a remarkable life. So many people have helped to make this complex project possible — generous donors, councillors and council staff, local historians and many more.

“The rich illustrations, the eye-catching design and the fascinating story told on the panel will increasingly make Caversham Bridge a focus for locals and visitors alike.

“The bridge itself is nearing 100 years old. It replaced the iron bridge completed in 1869, which in turn replaced the ancient bridge which had lasted several hundred years. It is an area rich in history.”

The narrow lane known as The Causeway, leading off Star Road to the east of Reading Bridge, goes across the flood plain to Dean’s Farm.

Now a housing estate, this is thought to be the site in medieval times of a substantial manor house, the home of Marshal.

He was not just lord of Caversham, he had lands across England, Wales and Ireland too.

Marshal was described as “the greatest knight to be found in all the world” by his contemporaries and had a glittering career. He was the landless second son of a middle-ranking nobleman. He trained as a knight, taking part in jousts and tournaments, and worked his way up, serving under four kings, Henry II, Richard the Lionheart, King John and the young Henry III, for whom he was regent.

He also fought and won the battle of Lincoln against a French invasion force. It was as regent that he ruled the realm from his Caversham manor house during his last illness.

Henry and the court stayed in the royal residence at Reading Abbey, across the Thames.

Since the start of his illness Marshal had confessed his sins every eight days to Abbot Simon, of Reading. After his death his body was carried to the chapel he had founded in the church of Reading Abbey.

His wife and son gave 100 Sous to the abbey where his body lay before it was taken to Staines and then Westminster and finally to Temple Church in London for burial.