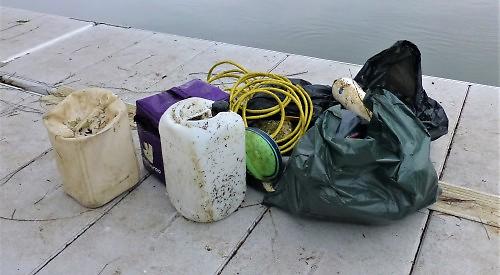 TWO canoeists filled two bin bags with rubbish they fished out of the River Thames in Caversham.

Susan Clarke and Jan Raciborski, who are members of Reading Canoe Club, covered a two-mile stretch between the club’s headquarters in The Warren, and Dreadnought Reach, off Henley Road.

They retrieved plastic drinks bottles, balls and parts of boats as well as two large water containers, a hosepipe, a kettle and a bicycle courier’s pack.

They also spotted items of bedding and a scuba diver’s air tank in the reed beds but couldn’t get close enough to grab them.

They came up with the idea after Mr Raciborski, who lives in Caversham, went paddling the previous day and was disappointed by the amount of waste in the water.

He was talking about it with Ms Clarke and she agreed to help.

Ms Clarke, from Basingstoke, said: “It’s not something you do unless you know what you’re doing — we’re both quite experienced but there were areas where we couldn’t go because the current was just too dangerous.

“We’re hoping to do it again but I’d emphasise that it’s not something anybody should have a go at.

“We love the river — it’s very therapeutic and a wonderful place to be so we wanted to do something to keep it that way.

“It is a shame that people dump their rubbish so casually and we’d urge everybody to take it home instead.

“You can understand how tennis balls go in the river by accident but there’s no excuse for things like drinks bottles.

“The Thames is also home to so much wildlife and needs to be protected for their sake.

“It was particularly upsetting to see a moorhen sitting on a bed of twigs surrounded by bottles and other junk.”