Butcher shuts shop after century due to rare illness 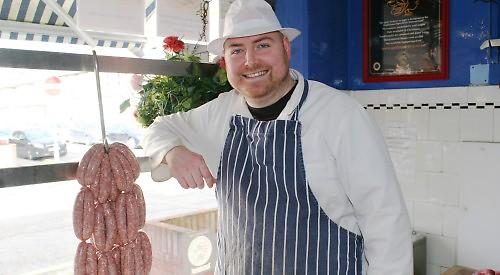 A FAMILY-RUN butcher’s shop has closed after serving the community for more than a century.

Whitings Butchers, of Caversham, ceased trading on Saturday because its owner Martin Howarth isn’t well enough to continue running it.

The 59-year-old, who lives in Reading with his wife Mary, has a rare immune condition called pyoderma which attacked the tissues in both his legs and forced him to undergo a double amputation.

He had his right leg removed two years ago, which prompted him to put the property in Coldicutt Street on the market, and late last year he was told that his left leg was also at risk.

Mr Howarth received an offer for the shop shortly after receiving the news and accepted as he didn’t feel he would be able to continue running it.

It is understood that the buyer doesn’t intend to keep the butcher’s open and instead will open a different shop or seek planning permission to convert the property into a house.

Mr Howarth underwent the second operation at the John Radcliffe Hospital in Oxford earlier this month.

His son Daniel, 29, who has been helping his father since he became ill, announced the closure to customers. He said many were upset as they had been shopping at Whitings for years.

Mr Howarth jnr said: “At first Dad hoped he’d be able to keep working but the reality has set in and I think we’ve accepted it’s best to call it a day. We were originally talking about winding everything up before Christmas.

“The amputation was a no-brainer because without it, his life was in danger. By cutting our losses now, we can make sure he has a good retirement and an easier life by adapting his house.

“It’s sad because he was a very active man and without this illness he’d probably have kept it going for at least another 10 years but with everything that’s happened it’s not a safe environment for him.

“He has had a good run and was always extremely busy. It has been a real pleasure to be part of this community for such a long time.

“The customers have been wonderful — we’ve had cards and bottles of wine. Dad built up a lot of trade over the years and they’ve been very loyal to him, especially over the busy Christmas period.

“It’s sad because part of you feels like you’re letting them down but they understand the situation and we’re thankful for their support.” The shop has existed since at least the late 19th century, when it was run by a Frederick Coldicutt, after whom the street is named.

Later owners included a Mr Liddiard and a Mr Townsend before Rob Whiting took it over and changed the name in the late
Sixties.

Mr Howarth snr, who was Mr Whiting’s nephew, bought it at the age of 21 after learning his trade at Matthews Butchers, another Reading business. His son, who first worked in the shop as a teenager, will now return to his former profession as an installation engineer for household and medical appliances.

He said: “I’ve got lots of work opportunities so I’ll be fine — my main concern is that Dad’s as healthy and happy as possible.

“It feels like a little bit of history is going because there aren’t many independent butchers left. It’s hard to compete with the big corporates these days.

“We were never here to make a huge profit. It’s always nice to make money and we’ve made a decent enough living but it’s more about the hustle and bustle of serving customers and having a laugh with them.

“You feel like you belong somewhere and the customers feel like part of your family. It’s a lovely feeling and we’ll miss that the most.”

Caversham still has the independent Caversham Butcher, which is based at St Martin’s precinct, off Church Street, as well as Jennings commercial butchers in Prospect Street.