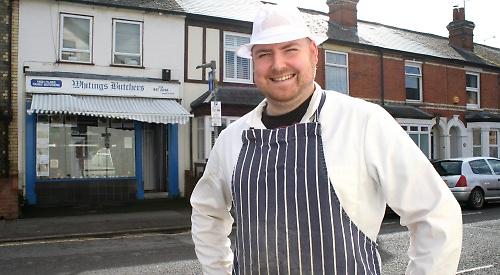 A BUTCHER’S shop which shut after serving the community for more than 100 years is set to become housing, writes James Burton.

Martin Howarth, who ran Whitings before closing it at the end of March due to ill health, is seeking Reading Borough Council’s permission to convert the ground-floor premises in Coldicutt Street into either a studio or one-bedroom flat.

The shop, which comprises a front room where the meat counters stood and a back room which was used for storage, was the only commercial premises on the street and is part of a terrace of houses. The council’s highways officers don’t object but have warned that prospective occupants would probably not get a permit to park in the on-street bays, which are already heavily used.

The property has no parking of its own. The officers say this is mitigated by the links to bus services in Gosbrook Road and its proximity to Reading station.

The Environment Agency has filed a holding objection, saying the applicant must conduct a flood risk assessment to prove the development wouldn’t increase the risk. No neighbours have commented. Mr Howarth, 59, had the business for almost 30 years but had to give up after losing both his legs to an autoimmune condition which forced doctors to amputate.

He put the property on the market after losing his right leg in 2018 and accepted an offer last year, then lost his other leg.

In recent months the shop was mostly run by Mr Howarth’s son Daniel, who has since returned to his old job as an installation engineer for electrical appliances.

The shop was previously run by his uncle, Rob Whiting.