Butcher finally chucks it in after four decades at shop 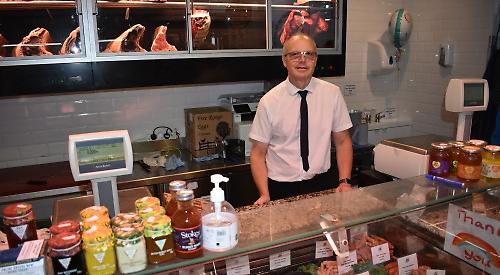 A BUTCHER has left the shop where he worked for 45 years.

Nigel Tutty, 61, joined Jennings Butchers, now called the Caversham Butcher, as a Saturday helper in the mid-Seventies when he was still at school.

He worked his last shift at the shop in St Martin’s Precinct, Caversham, on Saturday and was given a “guard of honour” by his colleagues using sharpening steels as he left.

Mr Tutty, who lives in Emmer Green, was also greeted by members of his family who applauded. They included his mother Margaret Simmons, wife Sandra, daughters Amanda Benstock and Gemma Tutty and granddaughter Olivia, six.

Mrs Benstock had made a placard which read: “45 years with Jennings and Caversham Butchers. So proud of you, dad. Well done.”

Mr Tutty blew them all kisses as he left and thanked them for coming.

He spent the majority of his time in the job when the business was known as Jennings and just a year under its new name after it was taken over by Roland Hazell and Mo Benassar.

Mr Tutty said: “I just can’t believe it has been 45 years. It’s just amazing how quickly it seems to have gone.

“I wouldn’t have stayed here that long if it hadn’t been a good place to work.

“I enjoyed meeting people every day and I’ve worked with some good people over the years and they are good friends.”

During the day, customers who had been served by the butcher over the years dropped into the shop to wish him well.

Mr Tutty said: “One couple who used to come when I started showed us their three-week-old baby and now that person is coming in with children of their own.

“I had a visit from one of the Jennings brothers who left years ago and came and said ‘hello’, which was really nice.” Mr Tutty joined Jennings when he was still a pupil at Chiltern Edge School in Sonning Common and would work on Saturdays.

After leaving at 16, he did an evening course in butchery at Reading College before studying at Smithfield College in London one day a week while continuing to work at the business.

He said he was leaving with mixed emotions, adding: “The time was right — it was time for me to move on to new challenges.”

He plans to work part-time behind the butcher’s counter at Morrisons in Reading.

“I’ll spend more time with my wife, which will be nice,” said Mr Tutty. “I’ve got a lot of work to do around the house like DIY and gardening.”

Mrs Benstock said: “He spent so many hours there and he went from being the Saturday boy to eventually managing the shop so he has done fairly well.

“It’s very strange to think he won’t be there anymore but I think about the long hours and dedicating so much to the job and I think he deserves a bit of a rest. I’m very proud of him.”