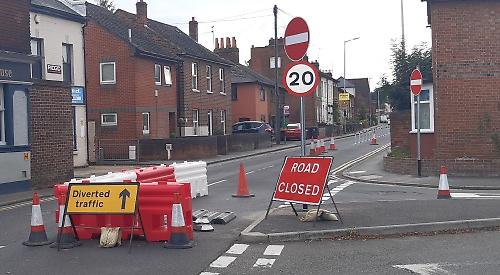 A TRIAL one-way road system in Caversham that was scrapped after less than two weeks cost £45,000.

Reading Borough Council wanted to create more space for pedestrians and cyclists in response to the coronavirus pandemic.

But residents and businesses slammed the scheme, which involved Gosbrook Road and Westfield Road, saying it caused traffic chaos and was dangerous.

The council responded by reverting to the previous arrangement and apologised.

It said £30,000 of the total cost was spent on materials which could be re-used.

The scheme was one part of a wider package of Active Travel schemes introduced in Reading under temporary powers afforded to all councils by the Government in response to the pandemic.

The intention was to make social distancing easier by creating more road space for pedestrians and cyclists, while recognising the ongoing restrictions on the capacity of public transport.

The Caversham scheme was specifically designed to alleviate pressures on social distancing caused by narrow pavements in the area, which are on school routes.

The scheme was delayed by more than six weeks due to so many councils trying to source the same road infrastructure at the same time.

Reading council said this resulted in much higher traffic levels than anticipated and created bottlenecks throughout Caversham.

Residents said the roads became heavily congested and that some cyclists and motorcyclists had mounted pavements and driven the wrong way.

They feared the problem would get even worse with the return of schools.

A Facebook group was set up calling for the scheme to be abolished and gathered 700 members in the first two days.

Another petition against the scheme, which was started by the Reading Cycle Campaign, gathered about 1,000 signatures.