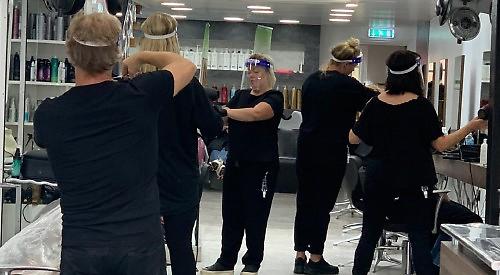 A CHAIN of hair salons is set to receive an insurance payment of tens of thousands of pounds following a legal battle.

Marc Antoni, which has branches in Henley and Caversham, is one of more than 400 businesses to benefit from a High Court ruling that they must be paid for loss of trade due to the coronavirus outbreak.

Insurance company Hiscox had refused to pay their insurance claims, saying that its policy did not cover a pandemic.

The Financial Conduct Authority, the industry regulator, took the case on behalf of the claimants to the High Court, which ruled in its favour.

The businesses will now have to make fresh claims.

Marc Antoni, a family business which has been going for more than 50 years, made a £100,000 claim for each of its five salons after being unable to trade for more than three months.

It also took out bank loans for £250,000 in order to avoid closing its salons, which are also in Woodley, Bracknell and Fleet.

It furloughed about 60 staff and the six company directors did not receive any money as they are paid by dividend.

Julie Giamattei, one of the directors, said she suspected the business wouldn’t receive the full amount it had claimed but called the ruling a step in the right direction after a “tough” year.

She said: “It has been dreadful and has caused us a huge amount of stress. I have gone through so much to fight this and had lots of long nights and early mornings.

“Even though this is good news, we will still have to pay off our bank loans. The business grants that we received got swallowed up very quickly.

“Thank God for the FCA — a lot of people just gave up and I said ‘No, we should fight’ and this proves we were right. I doubt we will get the full amount but something is better than nothing.”

The salons re-opened in July and had to spend thousands of pounds on personal protective equipment as well as introducing covid security measures, which have meant they have fewer customers than normal.

Mrs Giamattei said: “It’s not fun because we’ve had to work twice as hard, with twice as much stress, for less money. None of us has had any holidays.”

The wording in the Hiscox business interruption policy said it offered protection against “any human infectious or human contagion disease”.

But the company argued this only applied to a “local occurrence of a notifiable disease” and would not extend to a pandemic such as covid-19.

The FCA disputed this and the court agreed, saying that the wording did not expressly state that the disease should only occur within the relevant policy area.

Christopher Woolard, interim chief executive of the FCA, said the judgement was a “significant” step in resolving the “uncertainty” faced by the policyholders.

He said: “We are grateful to the court for delivering the judgment quickly and the speed with which it was reached reflects well on all parties.

“Coronavirus is causing substantial loss and distress to businesses and many are under immense financial strain to stay afloat.

“Insurers should reflect on the clarity provided here and, irrespective of any possible appeals, consider the steps they can take now to progress claims of the type that the judgment says should be paid.”

Hiscox has not indicated whether it intends to appeal the judgement.

A spokesman added: “Hiscox recognises these are extremely difficult times for businesses and regrets any contract dispute with customers, which is why it is committed to seeking an expedited resolution through this industry test case.

“In line with FCA guidance, Hiscox will communicate an update on the industry test case to relevant policyholders through the appropriate channels.”