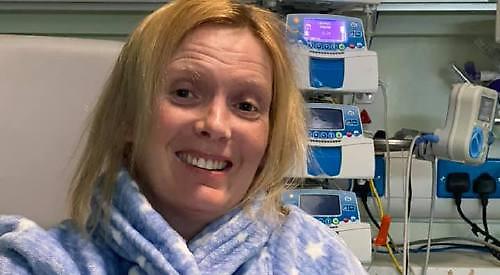 A WOMAN who almost died in a riding accident says she could be back in the saddle by Christmas.

Anna Tomson was crushed by her horse Berry when it was startled by an off-road motorcyclist and fell on top of her.

She suffered internal bleeding and broken bones and was in a coma in hospital for four weeks after the accident in May.

Now she is back home and on the road to recovery thanks to a combination of physiotherapy and exercise as well as her will to ride again.

Miss Thomson, 40, an event rider, said: “In the sum of things I’ve been really lucky. It’s going to take a while but my recovery has been amazing given my injuries.” The accident happened on May 17 as she and Berry, a five-year-old Anglo-European mare, were hacking along the bridleway through College Wood, off Deadmans Lane, Goring Heath.

They had left Cane End Stud and Livery, where the horse was stabled, just before lunchtime.

The motorcycle suddenly roared out of the trees behind them, startling Berry who leapt in the air, throwing Miss Tomson to the ground.

The mare, who weighs at least half a ton, toppled sideways on landing before rolling over her rider while getting back up.

Miss Tomson said she had heard motorcycles in the distance and hadn’t realised they were getting closer.

She said: “It happened incredibly quickly and I don’t know why I didn’t hear them coming but there was this massive roar behind us and Berry jumped sideways to the left.

“She then couldn’t find her ‘landing gear’ so she keeled over with me in the saddle. Horses can’t right themselves without rolling over so she had to roll on top of me to get up.

“She was pretty calm and stayed afterwards rather than galloping off, which happens when they’re seriously startled. I’d noticed two bikes shortly before the accident but I didn’t see the riders’ faces and nobody came past us afterwards.”

Although she was sprawled on the floor in pain, Miss Tomson assumed she was just winded so she rang the livery’s owner, Sarah Peters, who is a close friend.

She only realised something was seriously wrong when she couldn’t stand up.

“I thought I’d recover after a few minutes but it quickly became clear that it wasn’t going to work out like that,” said Miss Tomson. “I couldn’t catch my breath and there were stars going in and out of my vision.

“It was like the worst winding you could imagine and I was lucky that I reached my phone because it fell out of my pocket and I had to crawl over to pick it up.

“Sarah wanted me to explain where I was but by that point I was losing my power of speech. I couldn’t think clearly enough to describe my surroundings.”

Miss Tomson was discovered by two walkers to whom she explained briefly what had happened before blacking out. She didn’t recover consciousness for four weeks.

The walkers called 999 and several ambulances were dispatched along with the Thames Valley Air Ambulance, which landed in a nearby field.

Medics couldn’t move Miss Tomson for hours because her blood pressure kept dropping sharply and it was hard to stabilise her. She went through several tanks of oxygen and was administered intravenous drugs.

Eventually she was carefully strapped to a cart with thick wheels to negotiate the rough path to safety and then taken by ambulance to the John Radcliffe Hospital in Oxford.

She underwent several operations, during which there were numerous complications as the full extent of the damage become clear.

Her family, who couldn’t visit because of coronavirus restrictions, were warned she was unlikely to survive.

She was sedated for almost a month to improve her chances and was put on a ventilator. She suffered a life-threatening bout of pneumonia because of her inactivity and had to be fed through a tube.

As her health slowly improved, she was “weaned” off the ventilator for increasing periods of time until she could breathe unaided.

Almost exactly two months after the accident, she was transferred to the Royal Berkshire Hospital in Reading and 10 days later she was discharged.

Miss Tomson, who lives in Upper Woodcote Road, Caversham, with her mother Jacque and their collie dog Greta, said: “I don’t remember anything about the rescue.

“My first memory after talking with the walkers is coming round in intensive care. I’d lost almost four weeks, which is traumatic in itself.

“Because of the lockdown restrictions, I didn’t have any friends or family members there for reassurance, just doctors and nurses asking whether I knew what day it was, which of course I didn’t.

“They didn’t tell me much to start with because it’s policy to only explain if a patient asks. It can be a lot to take in and some patients get overwhelmed or panic if they learn a lot at once.

“At the start, it was hard enough getting my head around the fact that I was on a ventilator. All the surgeries had been performed by the time I was conscious and I didn’t know how serious things had been until much later.

“The weaning-off process took three or four days, starting with a few hours at a stretch. Once I could manage 24 hours they removed it altogether, which was scary as they had consultants on standby in case it had to be quickly reinstated.

“Luckily everything was fine when it came off, so they were able to start getting me back on solid food.” Once home, she struggled with fatigue and spent much of her time sleeping.

But then she was able to walk and drive again and she should make a full recovery.

She has been having physiotherapy privately and uses a cross-trainer to improve her aerobic fitness because being on the ventilator for several weeks reduced her lung function.

She must also rebuild her core and upper body strength as her abdominal and shoulder muscles were cut by surgeons at the John Radcliffe Hospital to help save her life.

She has just returned to “riding” using the horse simulator at Cullinghood Equestrian Centre, near Tidmarsh.

The device mimics a horse’s movements at various speeds and records the rider on video so they can review their technique. She has had a couple of sessions and says her balance and leg strength were better than expected.

Miss Tomson, a data analyst for a catering firm, hopes to be back on a horse by Christmas but will ride an older animal as it will be calmer. Then she plans to ride Berry again and return to eventing, which combines dressage, showjumping and cross-country riding, in the spring.

Miss Tomson said: “My physiotherapist reckons it’ll take a year to regain fitness but I’m working very hard during our appointments and doing all the exercises in between.

“The horse simulator is very useful because it’s a risk-free environment and you can check your position on the saddle.

“ I went very gently the first time and didn’t even break out of a walking speed. I found I was stronger than expected in some areas but worse in others.”

Miss Tomson bought Berry to replace an injured horse and had just started going hacking with her when the accident happened.

The mare is now being cared for temporarily by a professional near Newbury so she can continue getting riding experience. The pair were reunited soon after Miss Tomson left hospital and she visits once a week.

She said: “Berry was withdrawn the first time we met again but now she’s back to grooming me and mobbing me for carrots, so she definitely knows who I am.

“It’ll take a few weeks to get her used to me being in the saddle again but hopefully we’ll be doing events by February or March and I’m looking forward to it.”

Miss Tomson is grateful to the NHS for saving her life but has had to pay for her rehabilitation treatment.

She said: “The NHS was fantastic with every aspect of the critical care but I needed a bit more help afterwards.

“I didn’t qualify under the NHS physio ‘pathway’ as it wasn’t something like a broken ankle but it was vital to get moving as soon as possible. Even my doctors have accepted it’s a bit of a self-help thing.

“The proof of the pudding is in how fast I’m recovering and I should be able to do everything I did before.” Miss Peters launched a fundraising appeal which raised more than £13,000 towards her friend’s treatment costs.

“The response from the community has been very humbling,” said Miss Tomson. “I feel extremely lucky that I survived as it took four hours before I was stable enough to get out of those woods. My family were told several times that I probably wouldn’t make it until the next morning.

“I had pneumonia and could have been paralysed or suffered neurological damage but there was so much luck on my side.

“The walkers found me at just the right time, the medics were able to stabilise me and because of covid-19 the surgeons had nothing else on and could operate immediately.

“You have to keep looking to the future. I could easily have ground to a halt after everything that’s happened but that wouldn’t help anyone.

“I’d have preferred that it didn’t happen, of course, but it will make me stronger and more appreciative of what I have.”