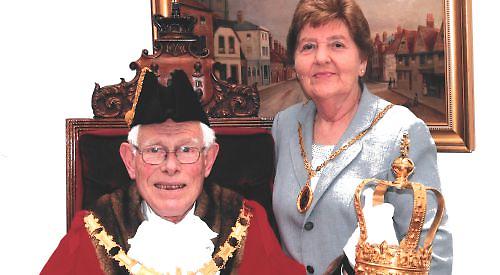 TRIBUTES have been paid to former Reading Mayor Fred Pugh.

He served Reading for more than 30 years as a Conservative councillor and was mayor in 2009/10.

Reading Conservatives said they were “deeply saddened” to learn of his passing.

Mr Pugh was first elected to the borough council in 1976 and retired at the local elections in 2012.

Over the years, he represented Caversham, Thames and Mapledurham wards and served on most of the council’s committees.

Mr Pugh also represented the council on the Royal Berkshire Fire Authority and the boards of Readibus, the local tourist board and the Citizens Advice Bureau.

He was also chairman of governors at Kendrick Grammar School.

A former railwayman, he was passionate about trains and travelled the world by rail.

He also campaigned to bring the Huntley & Palmers biscuit train back to Reading. Shahid Younis, who chairs Reading East Conservative Association, said: “Fred led the Conservative group for 10 years, taking it from a base of just three Conservative councillors up to 14 in 2007 at which point he retired from the front bench. Fred had a wonderful mayoral year in 2009/2010 with his loving wife Jean always by his side. It was an honour that meant a lot to him and he conducted his duties with the utmost diligence.”

Rob Wilson, former Conservative MP for Reading East, said: “I was greatly saddened to learn of the death of my friend and former council colleague Fred Pugh. He served his town faithfully for many years as a councillor and was forceful and formidable in the role.

“Fred was a good friend and it always came across to me how dearly he loved his family.

“My condolences to them, particularly his wife, Jean, who forged a long and successful marriage over many years.”

“He was always happy to listen to other people’s points of view and could be persuaded to alter his as a result.

“He loved his family, steam trains and Sweeney & Todd pies.

“He also cared deeply for Reading, working collaboratively with others across the political divide.

“One of his final achievements was helping to raise the funds to commission a fitting statue for Trooper Fred Potts.