‘Olly was our enigma, a square peg in a round hole, a puzzle to be solved’ 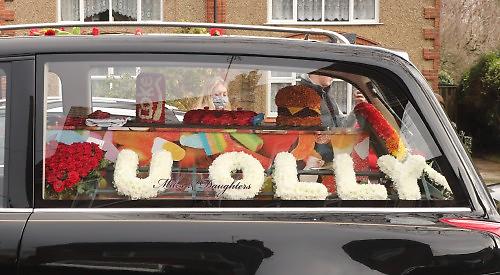 MORE than 100 mourners lined a Caversham street to pay their last respects to a teenage boy who was stabbed to death.

The funeral of 13-year-old Oliver “Olly” Stephens, who died in an incident at Bugs Bottom fields in Emmer Green on January 3, was held at Reading Crematorium on Friday.

The cortege left his family’s home at 11am and drove past Emmer Green Primary School in Grove Road and Highdown School and Sixth Form Centre in Surley Row, which he attended. Staff stood outside in silent tribute.

It also passed St Barnabas’ Church in St Barnabas’ Road, which held a vigil for Oliver and opened a book of condolences the day after his death.

Friends, relatives and well-wishers then gathered in socially distanced groups on All Hallows Road as the procession approached its final destination.

It slowed as it turned into the street so that people could place or throw a single red rose — Oliver’s favourite colour — on the bonnet of the hearse. Many people were wearing red coats, hoodies or jumpers.

The gesture was arranged by Oliver’s family and the Flower Shop in Prospect Street, Caversham, which was selling roses the day beforehand for a suggested donation of £1 or more.

The proceeds will go to Parenting Special Children, of Reading, which supports families of children with special needs.

Oliver’s coffin, which was decorated with images of sweets, was accompanied by the message “Love U Olly XX” in red and white roses with a heart standing for “love”.

There were also multi-coloured arrangements in the shape of a rainbow, a Coca-Cola can, a pizza and a hamburger. A stuffed toy carrying a pack of Haribo sweets was placed in the rear window. The hearse was led by a motorcycle rider and two youngsters on bicycles who performed wheelies with a number of cars following behind.

The cyclists were accompanied by Mac Ferrari, the founder of the charity Bikestormz, which aims to promote peace and prevent violence among young people through cycling.

The pallbearer, who wore a traditional top hat and tails, was accompanied by a man wearing a tuxedo with a red bow tie and glasses with black and white chequered frames.

As the procession neared the entrance gates, people began applauding. Some were crying and hugging one another.

Only a small number of people were allowed inside the crematorium’s southern chapel because of coronavirus regulations but everyone else was allowed to stand outside and listen to the service over a public address system.

About five police officers were present, including two mounted officers who chatted with younger mourners and answered questions about their horses before the ceremony began.

The coffin was taken into the chapel to the tune of Build Me Up Buttercup by The Foundations before the female celebrant welcomed the mourners, including Oliver’s mother Amanda and sister Emilia.

She said Oliver always celebrated the difference between people and was a staunch supporter of both the Black Lives Matter movement and gay, lesbian, bisexual and transgender rights. He hated unfairness and went out of his way to support those he cared about, going so far as to shave his head in solidarity with a classmate who lost their hair while being treated for leukaemia.

Oliver was a fan of films including Straight Outta Compton, Creep, The Grinch and the Disney films Hercules and Tarzan.

He enjoyed going out on drives with his father and stopping for drive-through meals.

He always came up with “creative” ways of arranging get-togethers with friends.

The celebrant quoted one girl who said: “Olly taught me how to be a better friend.”

She added: “Olly’s death has deeply affected everyone here… the horrific events of January 3 and their truly tragic outcome have produced deep and conflicting emotions within each of us — extreme shock, bottomless sorrow, anger, great pain and confusion.

“These feelings can overwhelm us when we least expect it and will always be with us. We are here today to celebrate a life cut short, but also one which has enhanced our own.

“Olly was unafraid to stick his head above the parapet. He could pull people together and quietly had their backs — he couldn’t bear any slight towards them, would not tolerate it and would not be talked down. He was wise beyond his years, always wanting to be ‘one step ahead’ and most of the time he was. We remember and celebrate his quick wit and banter.

“He had a ferocious appetite for knowledge, liked to shock and liked letting adults know that he knew more than they thought he did.”

The celebrant gave a reading on behalf of Mr Stephens, who thanked the community and emergency services for their support.

He also thanked everyone who had ever cared for Oliver, who was diagnosed with autism last year and was also thought to have pathological demand avoidance, a related condition.

He fondly recalled Oliver’s love of music, including the times when they would sing tunes such as Oasis’s Wonderwall together.

Mr Stephens said: “Olly left the house with a spring in his step, laughter in his heart and a ‘love you’ to Mum. We will remember him this way.

“What happened next was the stuff of nightmares — a knock on the door shattered our lives with the force of a baby rhino. No one should have to receive news like this or deal with a situation as horrific.

“But we are blessed as the time we shared with Oliver is our most precious gift. Olly was our enigma, a square peg in a round hole, a puzzle to be solved — a teenager. We loved, nurtured and cherished him. We never gave up.

“Olly and I would have snippets of conversation about music, culture, travel and his future. With his autism, I was often left wondering if any of it had sunk in. I shouldn’t have worried. The response from the school, his friends and community has proved he did take it in but in his own way.

“We used to talk about his autistic ‘superpower’, as we called it. Would he be a techno-whiz, a musician, artist or mathematical prodigy? It turns out that his gift was the power of love. All of you here are testimony to this… [he] touched so many lives without either us or himself knowing it.

“Although this stage of his life was awkward for him, we felt he was finally accepting his autism on the morning of his passing. We had fought this battle and won but the war was yet to come.

“I remember watching him sleep recently, filling the length of his bed with his frame, floppy hair and olive skin, beautiful. I felt so much love for him in that moment it made my heart miss a beat.”

Mr Stephens said Olly was overjoyed at the recent news of a pregnancy in the family as he would no longer be the “baby”.

His son always talked about starting a family of his own.

He added: “Olly will always be our baby boy — never becoming a man, never to rear a family, find true love, build a future, to move away from home... and to travel the world.

“Grandchildren we will never meet. Olly wanted children — lots of them, he always said! A whisper of a promise unfulfilled. We are at a loss but so thankful for the time we had with him.”

Mr Stephens concluded: “Please remember Olly as a loving, caring, funny soul who would stick up for the underdog, who would never back down from injustice, prejudice, inequality or cruelty. We will — God bless you, son.

“Be a wolf and not a sheep. Float like a butterfly, sting like a bee, fly so very high. We love you, Olly.”

Oliver’s uncle Tom read the poem Remember Me by Margaret Mead and several of his favourite songs were played, including Stolen Dance by Milky Chance, The Night We Met by Lord Huron and Phoebe Bridgers and Everything I Wanted by Billie Eilish.

The ceremony ended with a short silence in which people could pray or reflect on Oliver’s life.

Floral tributes were later moved to Bugs Bottom, where the family placed tealights in Oliver’s memory.

Reading East MP Matt Rodda, who attended the funeral, said: “This has been the most awful tragedy which has deeply affected our whole community. Everybody is thinking about Olly’s family and friends at this time.”

Family friend Billy Baker, 16, has organised an appeal which has raised more than £21,000 for Oliver’s family and for charities which fight knife crime.

• A 13-year-old girl and two boys, aged 13 and 14, are charged with murder and conspiracy to commit grievous bodily harm. The girl is also accused of perverting the course of justice. They have been remanded in youth custody with a provisional trial date set for June 21. An inquest was opened at Reading Coroner’s Court on Monday and adjourned.