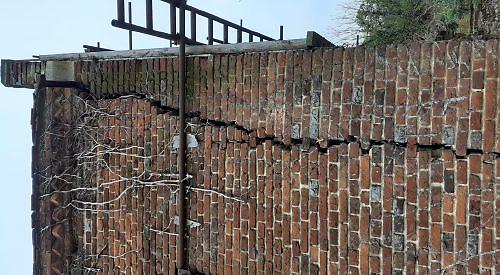 CAMPAIGNERS are calling for action to save a derelict Grade I listed building from collapsing.

Chazey Farm Barn, which is off The Warren in Caversham, had scaffolding and a temporary roof put on a year ago to waterproof and windproof it.

But Robert O’Neill, of The Warren and District Residents’ Association, says this isn’t enough and the 17th century barn is continuing to deteriorate.

He claims the building is tilting and could fall over if it isn’t reinforced and is particularly worried about a crack in the brickwork of the eastern wall, which he says is now wide enough to put your hand through.

Mr O’Neill says the problem is compounded by heavy goods vehicles transporting ballast to the site on the Mapledurham Estate, which he believes is being done to level out the land for redevelopment as a care home.

Barchester Healthcare, of Gloucestershire, was granted planning permission on appeal for a 78-bed home in 2009 but this may have expired.

Some groundworks were carried out in in 2010 but no building work took place. Mr O’Neill claims the lorries are too heavy for the narrow access road so it is cracking and the ground beneath is slipping downhill into the River Thames, increasing the risk of subsidence.

He has written to Reading Borough Council and Historic England, which has listed the building on its at-risk register, urging them to force InMind, a mental health provider, which holds the lease on the building, to do more. However, both said there was no danger, although they were monitoring the building.

Mr O’Neill said: “It was scaffolded over but we’ve been keeping an eye on it and no actual repair work has been done — they’ve just covered everything up.

“The original contractor’s sign has been removed, apparently because they were taken off the project.

“Another sign has appeared but I looked them up and it’s a little one-man band, which makes you wonder how seriously they are taking it.

“If that scaffolding stays but nothing else happens, that’s actually going to put extra strain on the barn and cause even more tilt.

“They’ve already demolished the other farm buildings on the site so it looks pretty desolate and we want them to prioritise the preservation of the barn, not any future developments they might have in mind.

“It’s a beautiful building with a considerable history and shouldn’t just be a footnote but I suppose it’s all about money.”

Historic England, which previously said the building was in “very bad” condition with an “immediate risk of further rapid deterioration or loss of fabric”, said InMind had carried out all the required work.

Last month the temporary roof was at risk of being removed due to a payment dispute with the contractor but a new arrangement is being negotiated. A spokesman told Mr O’Neill: “Owners of listed buildings have no statutory obligation to keep their property in a good state of repair but if works are urgently needed to preserve them then a local authority, not ourselves, can serve an urgent works notice.

“The scope of this notice is restricted to urgent works necessary to keep a building wind and weatherproof and safe from collapse.”

A Reading Borough Council spokesman added: “The urgent works were carried out last year, as specified by us and agreed by Historic England.

“The purpose was to protect the building and prevent the cracks in the walls, particularly at the eastern end, from getting worse. No further work was required or expected.

“The council continues to monitor the site and if more work is required, the relevant steps will be taken as before.”

The Mapledurham Estate says tenants are obliged to maintain the building under the terms of their lease.

InMind, whose offices are in Culham Lane, Remenham, cares for adults with long-term mental health conditions as well as elderly patients with dementia.

It has improved security at the site to deter thieves and vandals.

The company didn’t respond to a request for comment.