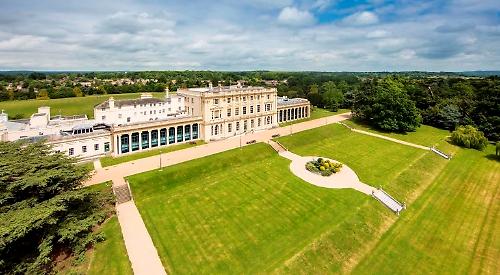 CAMPAIGNERS are seeking to re-open historic footpaths which may once have run across the Caversham Park estate.

The Grade II-listed stately home and its grounds have been vacant since the BBC relocated Radio Berkshire and its foreign media monitoring operations and put the estate on the market for a reported £20million in 2017.

Beechcroft, a property developer specialising in luxury retirement homes, has expressed an interest in buying and converting it, although no deal has been agreed.

When news of the firm’s plans broke earlier this year, residents said it was a chance to re-open the 37-hectare estate to the public as it had been closed for security reasons at some point during the BBC’s residence.

At a recent public meeting, which was held online, older neighbours recalled walking across the land decades ago and said several legally protected rights of way existed.

They understood these were shut for security reasons because BBC Monitoring dealt with sensitive information which it shared with other intelligence services.

However, others believed access was only allowed at the owner’s discretion and had no basis in law.

Reading East MP Matt Rodda and fellow Labour Party campaigner James Denny are now asking people to share their memories of old paths to identify where they might have been.

One is thought to have linked Peppard Road with Lowfield Road and there may have been shorter ones.

Mr Denny will also look through records, including old Ordnance Survey maps and the archives of Reading Borough Council, to see what might have existed.

The pair organised a survey which attracted more than 900 responses, of which 95 per cent agreed any plan should involve the community in some form.

Most people don’t oppose a residential conversion but say the buyer must preserve as much public access as possible, especially to green space.

They would ideally like a small museum about the history of the property and the lake to be restored.

Some former BBC employees who still live in the area would like the corporation’s involvement to be celebrated.

Mr Rodda said: “We had a very productive meeting, with lots of old employees agreeing to share photographs of the inside from its BBC heyday.

“We learned a lot about access to the building and its grounds, which the borough council is researching and seeking information about.

“Officers are looking for information about paths which may have been shut for some time. It would be really great to re-open them.

“The meeting was a great step towards protecting the historic building and hopefully opening the grounds to the public.

“I’m looking forward to working with the community, the council and the owners to make major improvements that will benefit local residents. It’s potentially very exciting but there’s still a long way to go.”

Mr Denny said: “We’re still not sure what the future holds because there hasn’t been a planning application and the BBC has confirmed the estate hasn’t been sold.

“However, Beechcroft’s proposal has obviously got people talking so in a sense we’re grateful because it has stimulated debate and a lot of good has come out of it. Some people remembered walking their dogs across the site for many years and it doesn’t appear that it was limited to one route so a bit of detective work will be required.

“I’m quite pragmatic about taking some housing as the estate is protected in the borough’s local plan.

“If the BBC is asking
£20 million it’ll be hard for anyone other than a developer to finance that and if some homes are needed to ensure the community benefits, so be it.”

Jane Stanford-Beale, a ward councillor, said: “The past year’s coronavirus lockdowns have shown that public green space is really important but Caversham Park has been privately held with no public access for many years. It’s an interesting campaign but ultimately the person who buys the site will make the decision on public access.”

The Caversham Park estate dates back to at least Norman times and the current house was built in 1850 by Horace Jones, who designed Tower Bridge, after its predecessor burned down.

It was once owned by the Oratory School, now based in Woodcote, before the Ministry of Health requisitioned it for conversion into a hospital during the Second World War but this didn’t happen. The BBC took it over in 1943.