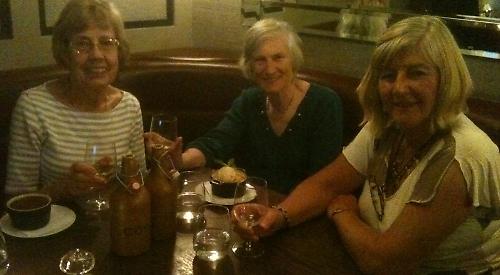 TWO members of the committee of Cercle Français in Caversham have retired.

The group is aimed at people who are learning French or love France and French nationals who want a little reminder of home.

Margaret Love has been a member of the committee for the past 25 years, while Mary Brooksbank joined 10 years ago.

They organised events and soirees with activities and talks.

Mrs Love, 77, from Tilehurst, said she enjoyed the friendly atmosphere of the group, which usually meets monthly at Church House.

She said: “We encouraged the members to speak French, or Franglais, a mix of English and French, during the events and we had speakers giving talks about many different subjects.

“For the last few years there were about 40 people regularly attending the events and it was really nice because French native speakers also joined the circle. I have been in charge for the past 25 years, so I thought it would be nice for someone a bit younger to take my place.”

Mrs Love, who was a primary school teacher and taught French as her main subject, said she would continue to attend meetings as they will resume in-person from September.

Mrs Brooksbank, 75, who also lives in Tilehurst, said: “We worked well together. I’ve been doing it for a long time now, so it good to give someone else the chance to do it.”

Vivienne Chambers, who has also been running the group, will continue to be on the committee.

For more information about Cercle Français and its events, email cerclefrancaisreading@gmail.com