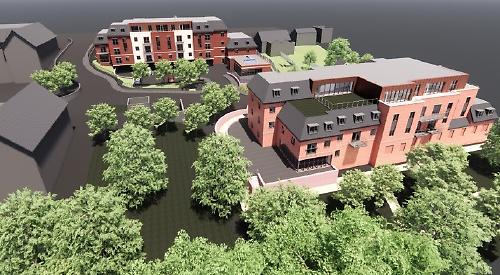 PLANS to build 60 retirement flats in Caversham have been withdrawn following a backlash from neighbours.

One block would have had 37 flats and the other 23, all with either one and two bedrooms. There would also have been 51 parking spaces.

The development would have affected the back gardens of 15 houses.

The company said previous developments, such as the 82-bed care home currently being built in Henley Road, had set a “general principle” for residential development. A previous application by Solve Planning for nine houses on part of the same site was approved.

Seven neighbours had formally objected to the latest proposal.

Patricia Taylor, who has lived in Henley Road for 42 years, said: “There has been a lack of legal consultation with affected residents.

“It completely fails to acknowledge that it is not in keeping with the current residential properties left dwarfed, or indeed those surrounding it to the front, side and rear.”

Allan and Christine Webb said: “Since November 2020, we have suffered the daily noise from the construction of the massive 86-bed care home, together with the continuous stream of huge construction vehicles delivering materials to the site.

“We are now threatened by two equally large four-storey blocks of retirement apartments, the second of which is only 25ft from our property and, if allowed to proceed, will cancel the privacy of our garden, which has been our sanctuary during the recent pandemic.”

Patricia Bliss said: “While I have no objection to the principle of retirement housing in this area as such, as a long-term resident of the Henley Road, I am both shocked and appalled by the size and ambitions of the new plans. This is not in any way, shape or form what was envisaged for this plot of land.

“However much the developers’ planning statement tries to play down the height issues, they remain high blocks of buildings... presenting as a very intimidating, oppressively large edifice which will dwarf the surrounding houses and is entirely inappropriate for a small back garden development of this nature.”

Michael Krasser said: “What are currently individual houses with vacant spaces between them would be replaced by a continuous massive block that looks somewhat oversized and I would not find acceptable in terms of height and impact.”

A planning statement submitted by Bowman Riley says: “This part of Henley Road has seen a number of relevant planning permissions in recent years. The layout integrates in an appropriate way with the surrounding area in terms of proposed density and utilisation of good quality landscaping.

“The proposals will minimise the impact on surrounding properties largely by utilising the change in levels across the site and ensuring the amenity of existing and future residents is protected.

“As well as being sympathetic to the existing dwellings, design consideration has been given to the larger approved care home scheme currently under construction to the west of the site. The proposed design reduces in scale to the east to create a gradual balance between the two building heights.”