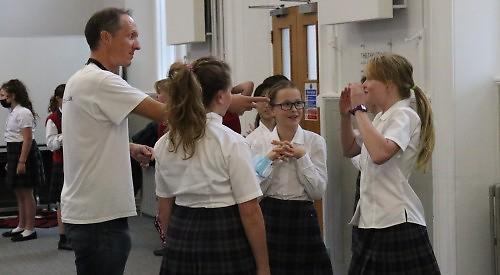 A PERCUSSION workshop was run by a West End performer in Caversham.

Ollie Tunmer, a drummer and director of the Beat Goes On, visited Queen Anne’s School for girls in Henley Road for the event, which was also attended by pupils from Rupert House School in Henley, Emmer Green primary, Caversham primary and Hemdean House School in Caversham.

Tunmer is a former cast member of the touring show Stomp and the Lost & Found Orchestra and has performed around the world, including at Sydney Opera House.

During the workshop, students explored rhythm and sound through stomping, clapping, vocalising and “body grooves” and gave a performance at the end of each session.

John Padley, director of music at Queen Anne’s, said: “Two hundred girls were totally absorbed and invigorated by the complex Brazilian rhythms — what a brilliant way to start the day. The hands-on experience undoubtedly will have an impact on their learning in the classroom.

“It was a telling reminder of the importance of creativity and music on wellbeing and education.”

The school also had a visit from former Poet Laureate Carol Ann Duffy, who discussed and read some of her work, which has covered subjects including climate change, the banking crisis and the war in Afghanistan.