Calendar shows come to a climax 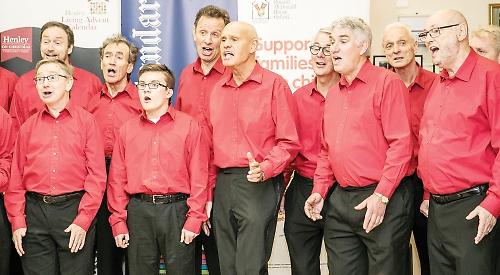 THE Henley Living Advent Calendar comes to a climax tomorrow (Saturday) night after more than three weeks of music, entertainment and fun.

The final performance will take place outside St Mary’s Church in Hart Street, as has become a tradition for the annual fund-raising initiative, which is now in its sixth year.

Organiser Richard Rodway says he is confident that the calendar will raise more than last year’s record total of £5,000 thanks to the unseasonably mild weather this month and the quality of the acts that have performed each evening since December 1.

He said: “We’re nearly there and as we reach Christmas with the schools having broken up, there has been renewed enthusiasm and more people at the events.

“The weather has contributed to that and the momentum has continued to build. People don’t know what they are going to get each night but they do know that it is going to be something special and interactive.

“There has also been a lot of positivity surrounding the events online and in the Henley Standard and that helps to get more people involved.

“We have got last year’s total firmly in our sights and I would expect us to go through that. We are expecting another record year.”

Musicians, actors, dancers, singers and theatre groups have appeared at different locations each night but their identities have been kept secret until their 30-minute performance.

Each evening has had a different dedicated charity which holds a bucket collection.

On Wednesday last week a jazz band performed at the Deanfield campus at The Henley College watched by about 60 people.

WOTjam, eight musicians from the Whitchurch area, played several jazz standards including Fly Me To The Moon and The Nearness Of You as well as a calypso arrangement of the Beatles’ The Fool On The Hill.

Nicola Taylor, of Lawlors the Bakers, handed out mince pies and slices of cake while dressed as Father Christmas’s wife.

The festivities continued in The Close, where guitarist and singer Jonathan Frost, of Gainsborough Hill, Henley, performed Over The Hills And Far Away and Monster Mash.

A tree in the cul-de-sac was lit up and more refreshments were served before the evening finished with a karaoke sing-a-long of Christmas carols and festive pop tunes.

The collection was in aid of Oxfordshire Mind.

The following night more than 100 people packed into Holy Trinity Church for a performance by dozens of students from Henley Music School in festive jumpers and hats playing strings, brass and wind instruments decorated with tinsel. A group of flautists played a medley of Christmas songs and were followed by some cellists performing Silent Night and Jingle Bells. Some younger children sang Frosty the Snowman.

A group of saxophonists and clarinetists played We Wish You a Merry Christmas and a string group performed Ding Dong Merrily on High before an orchestra of about 20 children performed Queen’s Bohemian Rhapsody.

The event was in partnership with estate agents Penny & Sinclair and in aid of Millie’s Dream, a charity that installs life-saving defibrillators in schools.

On Friday, nine-year-old Felix Richardson performed with his father Matt’s rock band Lucky To Be Alive.

He opened the set at the town hall by singing Oasis’s Wonderwall while playing Mr Richardson’s left-handed Rickenbacker guitar. His mother Avery Penna, of Hart Street, Henley, said: “He was amazing — he’s a little rock star. It was a lot of pressure but he pulled it off and I’m very proud of him.”

The played Let’s Dance by David Bowie, Superstition by Stevie Wonder, All Right Now by Free and Disco Inferno by The Trammps.

The evening was in partnership with estate agent Knight Frank and raised money for the Fish volunteer centre in Sonning Common.

On Saturday, 12 children from the Farrell Flynn Academy of Irish Dance, which rehearses at Trinity Hall in Harpsden Road, performed soft-shoe and tap dances in Falaise Square. Microphones were connected to the ground so that the dancers’ steps could be heard by the crowd of about 100 people.

Joe Flynn, the school’s leader, performed a solo tap piece and the show ended with a ceilidh when several members of the audience joined in.

Mr Flynn, who launched the school in January, said: “It was great fun and the youngsters are feeling very proud of themselves. It’s a great way to develop their confidence to perform for an audience, not just for themselves.”

The evening was held in partnership with estate agent Robinson Sherston and was raising money for the Royal British Legion.

Mr Rodway said: “A couple of people said that Saturday was arguably the best night of the calendar so far. It really was the embodiment of festive spirit in the community with an interactive and enjoyable performance.” On Sunday, a husband and wife performed at the d:two centre in Market Place.

Lou Fellingham, a Christian worship leader, singer and songwriter from Brighton, and husband Nathan on keyboards, played Christmas carols and festive classics for an audience of more than 60 people.

The event was in aid of youth and community group Nomad, which is based at the centre.

On Monday, a 20-strong Thames Valley Chorus choir performed in the Henley Cricket Club pavilion for an audience of more than 60 people.

Their set included festive and contemporary numbers, including You Raise Me Up by Westlife and Crazy Little Thing Called Love by Queen.

The event partners were Gill and Phil Chappell of GPC Marketing, who served warm festive punch and sausage rolls, sausages and pork pies. It was raising money for Ronald McDonald House.

On Tuesday, the Congo Frog Boudoir Band performed for a crowd of more than 70 people at River & Rowing Museum.

The 10-piece band were dressed in Christmas outfits with lead singer Mike Holland as a “turkey with mushroom stuffing”.

The evening was raising money for the museum and estate agents Davis Tate providing mulled wine and mince pies for the audience.

The Living Advent Calendar is sponsored by Higgs Group, publisher of the Henley Standard. Other sponsors include the Head Partnership solicitors, CTC-aspire and Philip Booth. The Henley Business Partnership and Henley Town Council also support it.