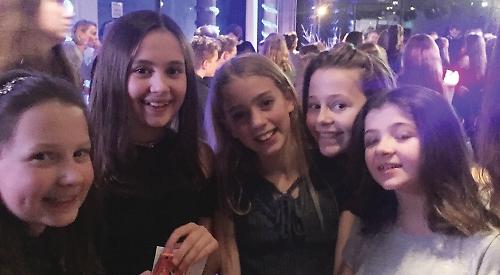 A CHILDREN’S disco held at the River & Rowing Museum in Henley raised more than £5,000 for charity.

Boys and girls aged 11 to 13 attended the Winter Sparkle event.

Sharky and George ran the disco and staged dancing games with prizes. Other attractions included a photograph tower, popcorn machine and snacks and refreshments.

Brigitte Dowsett, one of the organisers, came up with the idea of the disco after finding herself taking her children to lots of parties. She said: “There is not much for this age group in Henley so it was very popular. We sold out of tickets and any poorly children had their tickets snapped up by friends.”

The event was in aid of Action for Children, which helps some of the most disadvantaged children and young people in the UK. The other members of the organising committee were Lynda Myles-Till, Jo Bausor, Canny Appleyard, Sarah Pavey, Liz Stone, Elizabeth Leaver, Rachel Parkinson, Wendy Knatchbull and Gaynor Farrer-Brown.