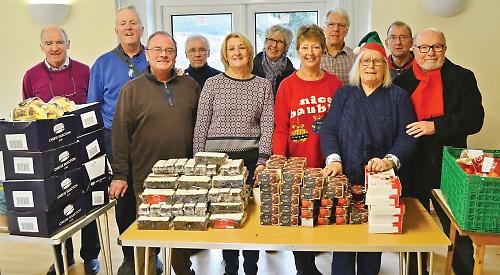 MEMBERS of Henley Lions Club have delivered about 90 Christmas food parcels to struggling families in the town and surrounding villages.

The packages, which they assembled at the YMCA pavilion off Lawson Road on Sunday, contained a mixture of basics, such as coffee, cereals and canned goods, and treats including Christmas cake and mince pies.

The food was paid for with donations to the club and provided by Waitrose in Bell Street, Henley.

The scheme has been running for decades and the Lions have run it for the past 14 years. The club works with other local charities and agencies to identify those who are in the greatest need.

Secretary Dave Murray said: “People think everyone in Henley has a lot of money but, although it’s generally a wealthy area, there are people who genuinely need a bit of extra help.

“A lot of it is just the basics but there are a few treats so that people can enjoy themselves at Christmas.”