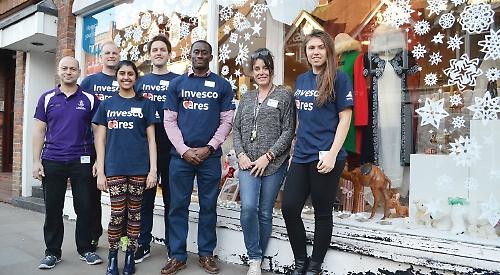 STAFF from Invesco Perpetual took over the Sue Ryder store in Henley for a charity challenge.

The team of five from the Henley investment firm worked at the shop in Duke Street all day as part of the charity’s annual “store wars” initiative.

Miss Dobson took along some of her own possessions to donate.

The team was in competition with another group from Invesco that worked at the Sue Ryder store in High Wycombe, with both trying to raise the most money. The Henley group came out on top, making almost £3,500 compared with the £3,000 taken by their rivals.

He said: “We are used to sitting behind our desks for most of the day so it was really rewarding to take some time out and make a difference.

“It was thoroughly enjoyable and it was a great effort from both teams.”

Ben Bar-Lev, corporate fund-raiser at Sue Ryder, said: “This is such a huge achievement and the shop managers thought they were inspirational. Their work, time, ideas, thoughts and determination made such a difference.”

The arrangement was designed and installed by Mrs Staines, of Deanfield Avenue, Henley.