I was one of first people to reach top of 19,700ft mountain in Himalayas 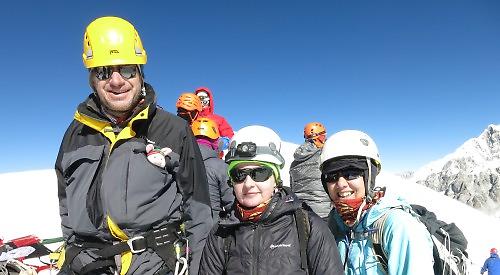 A MAN raised more than £2,300 for charity after becoming one of the first people to climb a 19,700ft mountain in the Himalayas.

Simon Wooller, of New Road, Shiplake, was part of a 10-strong group that tackled Karbu Ri, a peak near the Tibetan border in Nepal where no one had previously ventured.

The walkers, who were all British, faced temperatures as low as
-20C and increasingly thin air. Three of the initial 13 suffered altitude sickness and had to be evacuated by helicopter.

The remaining 10 reached the summit after two weeks and christened the mountain “white peak” after being given permission to name it by the Nepalese government.

Mr Wooller, 57, who lives with his wife Erika and grown-up children Alex and Louise, was raising money for Afrikids, which supports children’s projects in Ghana.

It was his fourth sponsored challenge for the charity following a trek in Morocco in 2008, an ascent of Mount Kilimanjaro in 2010 and a mountain walk in Ethiopia in 2013, all organised by a specialist company called Expedition Wise.

He trained by walking regularly in the Lake District and running. In October, he took part in the 10-mile Great South Run around Portsmouth.

Mr Wooller said: “The idea of making a first ascent appealed to me. I’ve found from previous expeditions that I have a pretty good tolerance for altitude so I was fairly confident there wouldn’t be any problems.”

The group flew from Heathrow to Kathmandu on November 5, then faced a nine-hour bus ride to their starting point at Chot Chot, 4,518ft above sea level.

For the climb, they were accompanied by a team of 27 Sherpa porters, each of whom carried more than 30kg of kit including tents, helmets, ice axes, harnesses, food, first aid kit and cooking equipment.

They followed a path through a valley which passed the Sherpa villages of Beding and Na, both of which were badly affected by a major earthquake in April last year.

Mr Wooller, a chartered surveyor, said: “There was an area below Beding where properties had been quite severely damaged and, sadly, there had clearly been loss of life.

“However, in both villages themselves, the reconstruction had more or less finished and people seemed to be extremely resilient.

“Other than by helicopter, access is only via the footpath we were following so it was remarkable to see how much work had taken place. They said they’d had very little support from their government and it was all down to the individual efforts of people on the ground.

“They were delighted to see us and the handful of other trekkers we encountered in the valley.

“Their main concern was bringing tourism back as that’s important to their economy.

“They are remarkable people and the strength of our porters highlighted that.

“They were crossing such difficult terrain with heavy loads that we couldn’t have coped with.

“They provided all the nutrition required for the ascent and their ability to produce incredible meals under such challenging conditions never ceased to amaze us.”

The group camped in one-man tents every night while their meals were prepared by four of their guides. As they climbed higher, they began sharing tents in order to stay warm. They remained in touch with families back home by sending and receiving text messages using their expedition leader’s satellite telephone.

About a week into the trek, Mr Wooller learned that his daughter had become engaged while on holiday with her fiancé in Thailand.

He said: “The messages would be read out to us as we were having our evening meal each day.

“I couldn’t call my daughter but I was obviously delighted and sent back a message of congratulations.

“The phone had a tracker built into it, so our families were able to follow our progress.”

Once they had reached the top of the valley they had to scramble over glacial moraine, a type of loose rock, to reach their base camp at 16,781ft.

They spent a day resting to get used to the lower oxygen levels, during which time two people were evacuated. They took part in a Puja ceremony led by one of their senior sherpas in which they made food and drink offerings to the gods of the mountain.

They smeared a coloured paste on their face and erected “prayer flags” in five colours symbolising the sky (blue), the wind (white), fire (red), water (green) and the earth (yellow).

Mr Wooller said: “It was a moving occasion which sought permission from the gods to ‘spike’ the mountain with our crampons, ice axes and other equipment.

“It was a way of ensuring the safety of the team and we felt like we’d truly ‘arrived’ once we’d stuck our flags in the ground.”

The group then pressed ahead to a second “high camp” at 17,536ft by climbing several frozen slopes and more stretches of loose rock.

By this point, they were wearing specially-insulated boots with crampons while attached to a safety rope which the Sherpas walked ahead to install.

The team had to leave their high camp for the summit at 2am, while it was still dark, to ensure they got back down before the following sunset.

They reached the top at about 9.30am and stayed for about 45 minutes to put up prayer flags and take photographs. They returned to the camp at about 3.30pm as the sun was setting.

Mr Wooller said: “The views were amazing. The approaching dawn brought a gradual lightening, allowing us to appreciate the stunning surroundings as they were revealed.

“It also became clear that what we had thought was the summit from high camp was actually the start of a ridge which continued rising upwards.

“After days of looking up at seemingly inaccessible snowy peaks, we were suddenly at a similar elevation and looking down into the desolate mountainous border region of Tibet.

“To our surprise, we were also rewarded with a clear view of the west face of Everest. I had never seen it in real life so that was a lovely surprise.

“From the summit, it suddenly became apparent just how steep sections of the ascent had been.

“I was exhausted but it was amazing to think we were the first people up there.

“It wasn’t too hard overall, though there were one or two moments where I suddenly found myself out of breath.

“The sherpas were so much fitter and very enthusiastic so we had to ask them to wait a few times!”

The descent took about a week because it became progressively easier as oxygen levels increased. Along the way the group stayed in several tea houses, a type of basic lodging run by locals.

They celebrated at Rum Doodle in Kathmandu, a restaurant popular with mountaineers, where they recorded their achievement on a paper “yeti footprint” which they stuck on the wall.

Their efforts will be recorded in the American Alpine Journal, an annual publication of significant climbs from around the world.

Mr Wooller said: “I would like to do more challenges but I’ve been told to give it a rest for a while as my wife finds it too stressful.”