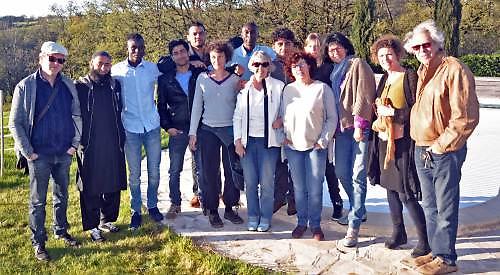 A COUPLE from Binfield Heath who retired to France are helping child refugees who have been denied entry to the UK.

Val and Malcolm Johnstone, who used to be partners in Jonkers Rare Books in Henley, say dozens of children have been prevented from joining their families in this country after the Government said it wouldn’t be taking any more asylum seekers.

The children, who are currently homed in a reception centre near the Johnstones’ home in Saint-Antonin-Noble-Val in southern France, have gone on hunger strikes to protest at the decision and two were admitted to hospital.

The couple regularly visit the children and have taken them shopping for clothes and toys.

They say they are worried that the “heartbroken” youngsters may travel to Calais and try to board lorries crossing the Channel to the UK.

The area is popular with English expatriates but more recently has become home to many refugees following the civil war in Syria.

Mrs Johnstone said: “A year ago we started getting refugees in the area so we went along to make friends and help them.

“A few weeks ago we got 30 young children whom France picked up and put in a welcoming centre.

“It was really quite a heartbreaking situation as they had come on the promise that they would get to go to England. They were all Afghan boys. They had no shoes or coats and were in a terrible state.”

The boys, who had been at the Calais “jungle” refugee camp until it was demolished in November, were aged 14 to 17.

Ten of them were allowed into the UK last month and the others are expecting to follow.

But Mrs Johnstone said the centre’s manager was told the UK would not be accepting any more of the children.

She said: “The boys have been told the shutters have come down but there’s no explanation.

“They are absolutely heartbroken. They all have families they were hoping to go to. It’s a really sad situation.

“They are lovely — they’re little angels and so sweet, I could mother them all. They went on a hunger strike, which none of us wanted them to do because they are already so thin but it was their way of protesting.

“They wanted to be told why they were being refused. I went over and tried to cheer them up.

“They have all the same worries and fears as other children but they have travelled the world to get here.”

Mrs Johnstone used her blog to appeal for items such as bed linen for the children.

The Henley Syria Support Group, which Mrs Jonkers is a member of, raised more than £1,000 so her mother could take the children shopping for clothes.

Mrs Johnstone was hoping to buy them warm winter coats but the children were so excited by some plastic toy helicopters at the shop that she relented and bought these instead.

She said: “They are kids and they want what children want. In the end they got donated coats that were too big for them and a plastic helicopter which made them delighted. We bought them little Christmas presents as well but it’s not what they really want, they want to go to the UK.

“It really should have taken them in. I can understand limiting numbers but children have the right to go. They already have families over there that will look after them.

“The kids only want their families and will end up going back to Calais and trying to jump on lorries.”

Mrs Johnstone and her husband regularly host refugees at their home and had 10 adult asylum seekers staying with them for Christmas.

“They haven’t caused any problems, they’re a delight,” she said.

“We have a strong group of English expats all working on the behalf of these refugees.

“We made 75 Christmas boxes for them with donated items. There’s a very strong feeling out here that they have had a tough time.”

The Home Office has said it is no longer allowing children who had moved from the Calais camp to reception centres to travel to the UK and that they should lodge applications to stay in France instead.

Mrs Jonkers said: “My parents were really upset by the crisis in Syria. They heard about refugees coming to their area and got involved with assisting adult asylum seekers, most of whom now have asylum.

“The children were interviewed and thought all was going well but then the centre’s manager received a phone call to say the door was closed, they weren’t taking any more children and they’d missed their window.

“They same thing is happening throughout France. The children are distraught.”