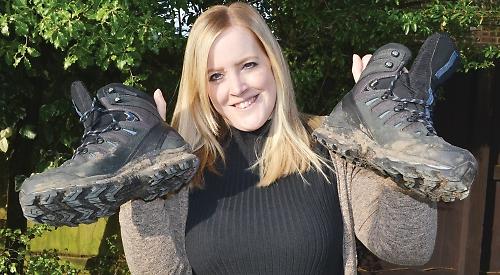 A CHILDREN’S entertainer is hoping to climb Mount Kilimanjaro for charity.

Hayley Pearson, 29, of Wayside Green, Woodcote, will fly to Tanzania on February 18 as part of a 20-strong group that hopes to scale the 19,341ft peak. The climbers will be raising money for the Thames Valley air ambulance service.

Miss Pearson was invited to take part by her cousin, Amy Pearson, from Didcot.

She then embarked on a fitness regime to get in shape, including taking walks in the countryside near her home, often with her cousin. She gradually increased her distance to 10 or more miles at least once a week.

The pair have also been on several mountain hikes in Wales to improve their performance on steep gradients and Miss Pearson regularly walks up and down the hill at Lardon Chase, near Streatley, with her mother.

Over the past year, the women have raised about £8,700 with a series of events including a New Year’s Eve party at Woodcote village hall, which was attended by 100 people, and quiz nights at pubs including the Highwayman at Exlade Street.

They also held a family day at Chiltern Park Aerodrome, near Woodcote, which is run by Miss Pearson’s parents, Dennis and Julie. The private airfield, where the  cousins work part-time, is a long-standing supporter of the air ambulance and regularly hosts fund-raising events.

Miss Pearson also raised £600 at last year’s Woodcote Rally with the takings from Percy Play Bus, a double-decker filled with toys and games for younger children, which she takes to events.

She and her colleagues aim to complete the challenge within six days, camping each night. Their equipment will be carried by guides but they will be at risk of altitude sickness and hypothermia as temperatures near the summit can drop to well below freezing. Miss Pearson said: “It was just one of Amy’s crazy ideas and I went along with it. She saw it advertised and thought ‘I’ll have a bit of that’. When she told me I agreed to go because it sounded like a challenge and I like a challenge.

“I was not a particularly sporty or active person and, to be honest, I’m probably still not. I’ve enjoyed training in the countryside, though — it really makes you appreciate what a lovely part of the world we live in.

“My overall mileage has probably decreased from its peak but I’m focusing more on hills and I’ve definitely noticed myself getting fitter.

“It has been a bit scary recently with all the ice underfoot and I’d hate to injure myself when I’m this close to setting off.”

Miss Pearson, who lives with her parents, said: “I’m lucky to have mum to motivate me.

“I’m trying not to think about the actual climb — I’m putting it to the back of my mind until the week beforehand and like to refer to it as a ‘little molehill’.

“I want to make the summit and am determined to succeed. Amy and I are both stubborn, strong characters and we’ll be dragging each other up if we have to. There’s a real team spirit and if one of us can’t make it, the other will absolutely have to for both of us.

“I’ve felt a real mixture of emotions over the past year. Between the training and the fund-raising it has been hard work and occasionally frustrating but also very enjoyable and rewarding. People have been very generous and we’ve more or less reached our target.”

Miss Pearson said they chose to support the air ambulance as they are interested in aviation.

She said: “We have seen the amazing work it carries out so we understand how important it is, especially as its only source of funding is donations.

“It plays an important role in such a wide range of incidents, not just the obvious things like major accidents. You never know when you might need it — it could save your life.

“Our friends and family said we were mad when we announced we were doing the climb but lots of people have thanked us and shared their stories about how the air ambulance helped them.”

To sponsor the Pearsons, visit http://bit.ly/1RE4fiq