Charity quiz night gives villagers something to do! 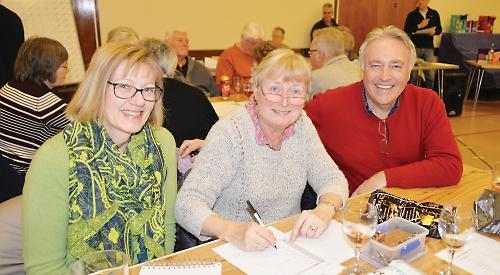 MORE than 100 people took part in a quiz night at Charvil village hall.

The event was hosted by the Charvil Village Society and raised more than £160 for the Sue Ryder hospice in Nettlebed and the Diana Brimblecombe animal rescue centre in Reading.

Teams of eight people with names including Scrambled Eggheads and We May Be Trumped were asked 100 questions in 10 rounds on subjects including current affairs and geography.

Each team had a “joker card” which they could use to double their points in one round.

The winners were a team called Alternative Facts, the phrase used to describe false statements over Donald Trump’s inauguration as president. The quizmaster was John Hobson.

The event has been running for more than 20 years and is now run by Mark A’Bear after long-standing organiser Roger Burns stood down.

Mr A’Bear said: “Roger took charge of more than 40 quizzes and deserves all the accolades for supporting the community and getting people along to this occasion.

“We now run the quiz three times a year and usually get about 100 residents at each event.

Mr Burns added: “It’s primarily a village event. It does raise money for charity but that isn’t the main reason — in a little place like Charvil there’s not a lot happening!”