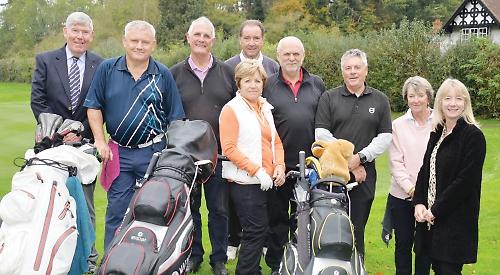 A CHARITY tournament at Henley Golf Club raised more than £3,500 for the Chiltern Centre for disabled children.

A record 72 players took part in the eighth annual event, which was sold out for the first time.

They were divided into 18 teams of four and played a morning of Stableford golf, which is quicker than the regular game, before enjoying lunch at the clubhouse.

Prizes for the longest drive were presented to Jane Tavinor and Ben Postlethwaite while the nearest to the pin at the seventh hole were Christine Valentine and Miles Bentley.

Other donors included the Maltsters Arms in Rotherfield Greys, the Henley Clinic beauty salon and Mark Evans, of Towergate, who gave a magnum of wine.

The Chiltern Centre, off Greys Road, provides respite care for parents of children with a range of physical or learning disabilities.

Chairman of trustees Paul Barrett said: “This event has gone from strength to strength. Holding it later in the year than usual has allowed more people to take part.

“It shows how the local community supports us.”

Organiser Emma Lerche-Thomsen said: “This is one of my favourite events of the year because there’s so much loyalty among the players, many of whom have taken part every year.

“The golf club has always been incredibly welcoming and was overwhelmed by this year’s attendance. We started with just six teams but we’ve built it up.”