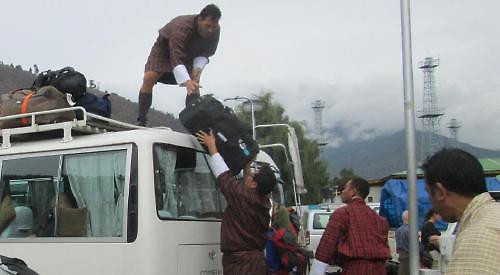 SONNING Common’s village librarian has completed her 16th sponsored trek for the Institute of Cancer Research.

Rosemary Dunstan, of Birch Close, was part of a group that walked 50km along the Druk Path in Bhutan in five days.

The path from Paro to Thimpu was rocky and uneven and went as high as 4,500m, where there was snow. The group would camp at night, when temperatures fell below freezing.

Mrs Dunstan, 61, said: “The scenery was magnificent, with alpine meadows and flowers, pine forests and views of distant mountains and valleys.”

To acclimatize she also walked from Paro to the Taktsang Monastery, which is more than 3,000m above sea level, and back again. Mrs Dunstan said: “The shortage of oxygen in the atmosphere causes extreme shortness of breath and the possibility of headaches, nausea and vomiting. To minimise the effects, the idea is to climb up high but then go down again and sleep at a lower altitude.

“The monastery is awe-inspiring as it clings on to what looks from afar like a sheer vertical cliff. It was a hot, tough climb. We were amazed to see people attempting the climb without water and one lady wearing flip-flops.

“Our walk was delayed for a while by an incident on the track ahead of us in which a man in his seventies with a heart condition collapsed and died. It gave us all pause for thought.”