Firemen heat up the night 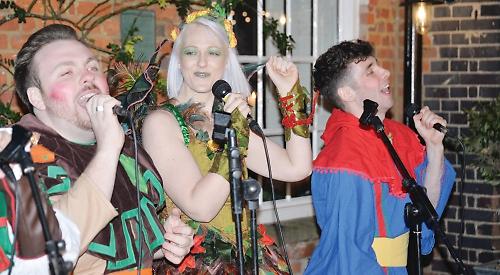 But they were stopped by an “elf and safety” inspector before the routine got too racy.

The performance on Saturday night was the ninth for this year’s Henley Living Advent Calendar.

Each night of December until Christmas Eve, a different venue is hosting a 30-minute performance. Every show is dedicated to a charity or good cause, whose volunteers hold bucket collections. So far, more than £2,800 has been raised.

The comedy sketch was called “Elf and Safety Visit” with Mr Evans playing the starring role.

As he arrived at the station, the song You Can Leave Your Hat On began playing.

The station door then opened to reveal four members of the retained fire crew in their uniforms moving suggestively in the style of the comedy film about a group of jobless steel workers who become strippers to make money.

Mr Evans exclaimed: “Whoa, you can’t do that show tonight, that is for tomorrow night! Now you have finished fooling around, get on the squad line and parade.”

Nine people from the audience were then called on to help and each one was given a piece of paper with a letter written on it.

As each letter was revealed, Mr Evans told how it stood for a piece of fire equipment. including a chimney kit, a hose, ice-cold water, a siren, a thermal imaging camera and an alarm. As some letters were revealed, Mr Staines — the station’s newest recruit — was soaked with water by his colleagues using a hose and buckets of water.

As the final letter “S” — for speedy getaway — was revealed, the fire engine was started and the firefighters replaced their helmets with elves’ hats and jumped in.

The letters were seen to spell out the word “Christmas” and Slade’s Merry Christmas Everyone was played to signal the end of the show.

Mr Saunders, the crew’s manager who wrote the script, said: “I’m happy with how it went. It’s difficult to come up with a new idea every year.”

Richard Rodway, organiser of calendar, said: “This was everything we have come to expect from the fire station. What’s not to like about threatening to go do The Full Monty before switching into throwing water all over people?

“When you start doing things like that the kids are always going to love it. It gets the audience going like a panto.”

The performance was in aid of the Fish volunteer centre in Sonning Common and held in partnership with Tesco.

On Thursday last week about 75 people witnessed a performance by the Henley Rock Choir at the Henley Cricket Club pavilion.

Conductor Lucy Hewes led the
33 singers through songs including Beyonce’s Halo and Merry Christmas Everyone by Shakin’ Stevens.

The evening was in aid of Badgemore Primary School. The spectators were served winter cider and baked treats provided by GPC Marketing and Lawlor’s Bakery.

He put an envelope with a card in it into Mr Rodway’s jacket pocket. He then asked a member of the audience to pick a card from a pack and blow on it in the direction of Mr Rodway. The card in the envelope matched that of the card pulled out of the pack.

Mr Rodway, who is a partner at the Head Partnership solicitors in Henley, said: “It was such a joyful performance and created such a good atmosphere.”

On Friday night five-piece folk band Highly Strung performed at the Bull on Bell Street pub, playing songs such as Dakota by the Stereophonics and Paint it Black by the Rolling Stones.

Despite the freezing temperatures, about 75 people watched the show, which was in aid of brain injury charity Headway Thames Valley, which is based in Henley.

Sunday’s performance was moved from Falaise Square into the town hall following the snowfall.

The audience of about 100 people waited expectantly on the stairs where they were met by Mr Rodway who apologised but said that at least it was warm and dry indoors.

The show was in aid of Wyfold Riding for the Disabled and Gill Rushworth, from the charity, spoke about its work before members of the audience were ushered through the “advent doors” and into the main hall.

There, they were greeted by Stephanie Maxwell’s Dancing Divas & Dudes, who performed dances to some festive songs including Kelly Clarkson’s Underneath The Tree.

On Monday, broadcaster Mike Read was one of two people to perform from the first floor window at Handelsbanken in Tuns Lane to an audience of about 80 people.

The former Radio 1 DJ played the guitar and sang Rudolph the Red-Nosed Reindeer and Jingle Bells and the audience joined in.

Read also paid tribute to his friend Keith Chegwin, who died on Sunday.

When he had finished he introduced Katie Green, 18, from Harpsden, who also sang and played guitar.

Katie, a pupil at Queen Anne’s School in Caversham, performed Little Lion Man by Mumford & Sons, Sunday Morning by Maroon 5, Let Her Go by Passenger, Fix You by Coldplay and Kiss Me by Ed Sheeran.

She said: “I really enjoyed it. I have never sung out of a window before so that was a new experience and I don’t know if I’ll ever get a chance to do it again.

“I’ve come to watch the advent calendar before so it was nice to do it myself. The crowd was bigger than I was expecting. I hope we raised a lot for the charity.”

The performances were in aid of Camp Mohawk in Wargrave.

The group, which included the heroic outlaw, Friar Tuck and Maid Marian, performed two songs to a crowd of about 50 people in the hotel courtyard.

They sang It’s Raining Men by The Weather Girls and I’m Gonna Be (500 miles) by The Proclaimers as Robin serenaded Marian.

They were promoting the pantomime at the Kenton Theatre, which starts today (Friday) and runs until December 28.

The evening was supporting two charities on behalf of the Henley Festival, the Charlie Waller Memorial Trust, which promotes awareness of depression, and the Teenage Wilderness Trust, which supports students who find it difficult to engage with mainstream education.

Mr Rodway said: “I thought it was a fantastic preview of the panto and I urge everyone to do what I’m going to do with my kids and go and see the full show because on the strength of that I know it’s going to be fantastic.”

Raffle prizes included a £60 Copas voucher, wine, champagne and two general admission tickets and parking at any night of next year’s festival.

Mr Rodway said: “It has been a really strong few days in terms of performances but unfortunately the cold weather meant footfall has been a bit lower than expected.

“However, overall we have raised more for the charities than in the same period last year and the weather is going to improve.

“At Handelsbanken the audience answered my call to empty their pockets as we received five euros and a couple of buttons!”