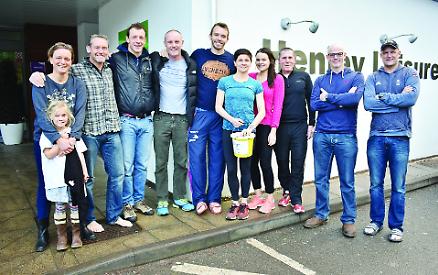 A SPONSORED swimming challenge at Henley leisure centre raised more than £200 for the Chiltern Centre for disabled children.

Twenty-four members of the Henley Tri Masters Swim Club took part in the three-hour event, of whom 10 swam 10km, or 400 lengths, while the remainder swam half that distance.

The 10km swimmers started slowly and took regular breaks before ramping up their efforts as they neared the goal.

Myles Ottaway, a regular participant in the Henley Swim open water events, continued for an additional kilometre once everyone else had finished.

Also taking part were double Olympic rowing gold medallist Steve Williams and Olympic silver and bronze medalist Alex Partridge, who swam 10km. The event, which started at 6.30am on Friday, was taking place for the third year running and was supporting the Chiltern Centre for the second time since 2015.

Organiser Mike Whitworth, of St Andrew’s Road, Henley, said: “We’re all physically fit enough to do it but the hard part is the mental challenge as it can get a bit repetitive and you have to remain focused. It’s also tougher at this time of year because many of us have coughs. However, we’re very proud to have finished.”

Liz Deacon, fund-raiser for the Chiltern Centre, off Greys Road, said: “We’re very thankful for their support and think it’s amazing that they’ve got up so early and done this for us, especially so close to Christmas.”