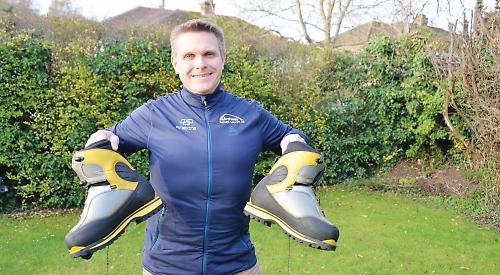 A SPORTS-MAD businessman is to realise a lifetime’s ambition when he attempts to climb Mount Everest.

He will be raising money for the Thames Valley Air Ambulance and hopes to raise £5,000.

Mr Renshaw, who runs his own marketing company, is a keen hockey player, skier and mountaineer and has previously climbed Mount Kilimanjaro in Tanzania, which is 5,895m (19,341ft), and Mount Denali in Alaska, which is 6,190m (20,310ft).

He grew up in the North and developed a love of mountaineering while climbing in the Pennines.

“I thought it was a good idea to climb Everest when I was younger and now it’s at the front of my mind,” he said.

Mr Renshaw will fly to Nepal in early April and spend a few days in Kathmandu before travelling to Tibet for the climb up the north side of Everest.

He and his fellow climbers, who are all of a similar experience, will trek in the surrounding hills in order to acclimatise before moving up to Everest base camp at 5,200m.

From the highest camp the climbers will wait for a weather window before attempting to reach the summit. Because they are ascending the Tibetan side of the mountain, the climbers will not be able to use Google and Facebook, which are blocked by the Chinese government, so may find it hard to keep in touch with loved ones.

Mr Renshaw, who lives with his partner Jane Gealy, who works in digital marketing, said: “We will have a satellite phone but that’s only for emergencies.

“I’m sure we will be able to keep in touch with messages. It will only be a short message to let her know I’m okay. Jane is supportive of me but, naturally, she’s nervous.

“When I climbed Denali there were regular updates on our progress on a webpage but someone had health problems so the updates had to stop while the family was notified. There were no updates for four days.

“I’m starting to feel nervous. I’m confident in the training I have done but as we get closer the nerves have set in. Six to eight weeks is a large period of time and there is so much you can’t control like the weather. I could get altitude sickness.

“A few years ago a friend was out there and there was an earthquake so he couldn’t climb. Those kinds of things can happen.”

The climbers will have a guide with them but he will look after the logistics rather than lead them up the mountain or instruct them how to climb.

“We are expected to be self-
sufficient,” said Mr Renshaw.

He has been preparing for the challenge since last spring, trekking for two hours a day, five days a week between Sonning Common and Peppard Common.

He said: “I’ve been walking up and down the hill there. With mountaineering you have to be able to cope with the boredom and going up and down, so it’s perfect.

“I’ll walk in the woods or if it’s dark I will go up and down the pavement but the road can be extremely busy.”

Mr Renshaw also completes 30 minutes a day on a rowing machine at home and plays indoor hockey twice a week and underwater hockey at Queen Anne’s School in Caversham once a week.

He is also a skiing instructor but this winter is the first time he has not been on the slopes in 14 years in order to avoid the risk of injury.

Climbers have to choose one of nine different peaks across the world in order to prove their ability to take on Everest and Mr Renshaw chose Mount Denali, the highest mountain in North America.

He said: “It shows you can go to that level. You could spend £100,000 on a guide to take you without that experience but that is when bad things can happen.”

Mr Renshaw has also completed the Inca trail in Peru and has visited Nepal numerous times to trek the Everest trails and climb Mera Peak, a Himalayan mountain that is 6,476m (21,247ft).

He said he chose to raise money for the air ambulance because it made a difference going to places to treat patients that ordinary ambulances couldn’t reach.

“The work they do is extremely important,” he said. “It is an amazing organisation, which is self-funded.”