Pair to paddle 125 miles in a day for charity 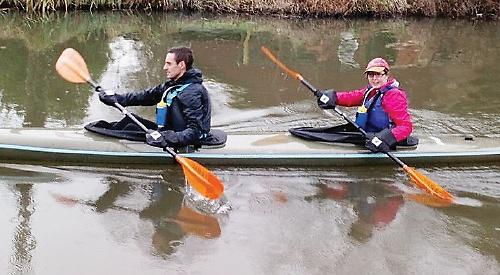 THE stable manager for Wyfold Riding for the Disabled is to take on a canoeing challenge to raise money for the charity.

Elizabeth King, from Caversham, will complete the Devizes to Westminster international canoe race on March 31.

She and her father Nick King will have to paddle non-stop for 125 miles, through 77 locks, along the River Thames in 24 hours.

The finish line is Westminster Bridge, opposite the Houses of Parliament.

They hope to raise £7,000 for the charity, which provides horse riding facilities for people with physical or mental disabilities and is based at Wyfold Court.

Miss King, whose sister Rebecca, who is blind, was a client of the charity, said: “We are under no illusions as to the task before us as the race has also been called the Everest in terms of paddling.

“We started back in June by joining a local club, having had no or very little experience.

“Now we are now fully engaged in our training, which at times is both wet and cold. We are looking forward to completing this race.”

Gill Rushworth, the charity’s fund-raiser, said it had been a difficult few months due to events in December being cancelled due to bad weather.

She said: “We usually count on the income from these events to help see us through the winter months when the ponies need lots of hay and food and at the same time our income drops due to having to frequently cancel riding, being an outdoor-only facility.

“It was great to hear that some of our supporters are taking on exciting sponsored challenges on our behalf over the next few months.”