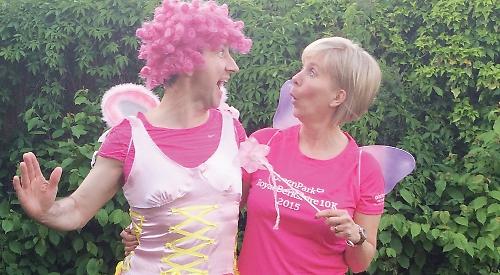 A CAR salesman is to run 10km dressed as a fairy to raise money for charity.

Nick Robey, sales manager at the Vauxhall dealership in Peppard Road, Sonning Common, will be one of 100 “fairies” taking part in the Royal Berkshire 10km on May 20 aid of the Teenage Cancer Trust.

Among the others will be his wife Jeannie and the couple will wear bright pink fairy wings and tutus to make sure they stand out.

Mr Robey said: “Every family, including my own, has been touched by cancer in some way and to see young lives full of potential come to such an abrupt end is just so tragic.

“The expert care and support that teenagers are given by the trust enables them and their families to face the future with the knowledge that someone will be there alongside them whatever the outcome.”

People from South Oxfordshire, Berkshire and Surrey have signed up to be part of the team for the event at Green Park in Reading.

Mr Robey said: “At the moment we have 54 fairies ranging in age from their twenties to their seventies and in running ability from seasonal athletes to those who have never run before.

“All are committed to raising their £100 to make a difference and we still have plenty of space for more fairies to join us.”

Mr Robey has previously fund-raised with his friend Jason Barrett, from Caversham, making more than £30,000 for various charities.

In 2011 they ran the Reading half marathon and the London Marathon dressed as Fred and Wilma Flintstone.