On Your Bike back for 12th year 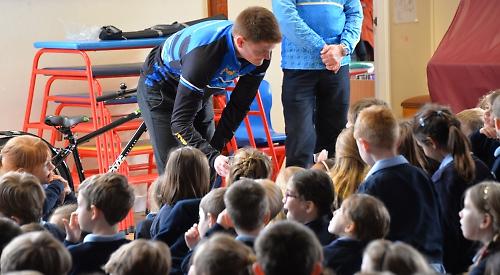 ON Your Bike will return next month for the 12th year running.

Hundreds of families are expected to take part in the fund-raising bike ride on March 25, starting at Sonning Common Primary School.

As in previous years, there will be six-, 12- and 20-mile routes and a supervised playground cycle for young children.

The event, which is aimed at all ages and abilities, was officially launched at the school on Wednesday by Rob Bowen, of AW Cycles, in Henley Road, Caversham, which sponsors the event.

Anyone who signs up for the ride before March 19 has a chance to win a new bike supplied by the shop.

Mr Bowen, a former professional cyclist, led the school assembly and told the children about some of his cycling experiences.

He also showed them videos of him performing tricks at Henley skate park and encouraged them to visit it as well as the BMX track in Wargrave.

Mr Bowen said: “I’ve been cycling for more than 20 years and I still love riding my bike. I go out three or four times a week. I want everyone to sign up for On Your Bike.”

Pupil Violet Martin, eight, said: “I do On Your Bike every year with my mum and you get a chocolate bar at the end.”

Ella Macdonald, 10, said: “I like doing On Your Bike because I swim so much I don’t have much time to go cycling.” All the money raised by the event will go to the primary school, the Fish Volunteer Centre in Sonning Common, Sonning Common First Responders and Sue Ryder.

On Your Bike has been running since 2007 and has raised more than £40,000 for various charities. Last year, a record 599 people took part.

Founder Penny Snowden said: “I’m always delighted by how much enthusiasm there is among local people for On Your Bike. We can’t wait to see how many people join us this year.”

Headteacher Chris Hirst said: “It’s an important event for the community and an opportunity to get everyone together.”