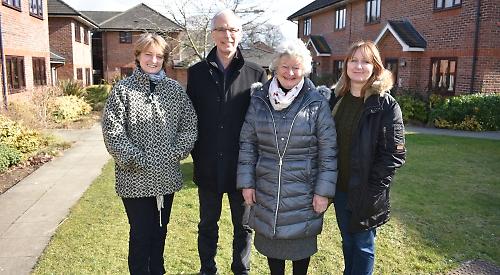 CAMPAIGNERS have won their fight to secure housing for young people in Henley.

Henley YMCA has now bought the lease on its Lawson Road complex, which houses 31 people aged 18 to 25 with links to the town and nowhere else to go.

A £300,000 appeal reached its target in January last year, just 14 months after being launched when YMCA England announced that it was exiting housing and selling the properties it owned. The charity needed £570,000 in total but secured a £100,000 grant from Henley Town Council and a £170,000 loan from South Oxfordshire District Council. Now the legal documentation relating to the grant and loan have been signed off.

Rosemary Duckett, chairwoman of trustees, said: “I’m relieved and excited that it has all gone through and grateful to all the donors. The residents have now got a safe and secure place to live. It’s not only a roof over their heads but they get help and guidance with taking the right path in life.”

“The YMCA is part of the housing mix and we’re really proud and pleased that Henley has this facility to offer its young.” The bathrooms at all 31 flats have been renovated and the YMCA plans to do the same with the kitchens, which will cost about £3,000 each.

It plans to advertise the hire of its pavilion and sports pitches more widely in order to generate revenue.

Mrs Duckett said the charity may expand its education programme to offer more help in areas such as literacy and computer skills.