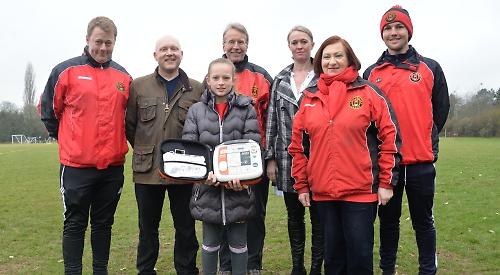 AN automatic defibrillator has been donated a Henley children’s football club.

The life-saving device, which was funded by a £900 grant from the Round Table Charitable Trust, was presented to AFC Henley on Saturday as part of the Millie’s Dream campaign.

The club will keep it on standby during weekend fixtures at the Jubilee Park sports ground off Reading Road, where Henley Hockey Club also plays on the artificial pitch.

The device can be used to shock a person’s heart back into a normal rhythm if they go into cardiac arrest.

The club wanted one following the sudden death of Simon Priestley, whose nine-year-old son Jonty plays for its under-10s team. Mr Priestley collapsed and died while captaining Henley Rugby Club’s fourth team during a home match in January. AFC Henley asked Round Table for help and the charity purchased the defibrillator through Millie’s Dream, which was set up by Sarah Roberts after her daughter Millie, 11, was diagnosed with a heart and lung condition.

It has now installed 58 of the devices in Henley and surrounding villages.

The club has trained several of its coaching staff to use the defibrillator. The course was provided free of charge by South Central Ambulance Service paramedic Steve Cartwright.

Chairman Trevor Howell said: “We’re very fortunate that our fund-raiser Toni Aitken was aware of Millie’s Dream and was able to put us in touch. This will be useful for not just the players but the spectators and coaching staff.”

Miss Roberts, of King’s Road, Henley, said: “A defibrillator needs to be available within five minutes of a person collapsing.

“A cardiac arrest can affect anyone of any age. In the past year we’ve lost a rower at Henley Rowing Club as well as Simon, highlighting the need to have as many accessible defibrillators as possible.”

Nick Fox, a trustee of Round Table, said: “We were very keen to support this because so many families use this area and we knew it could potentially benefit a lot of people.”