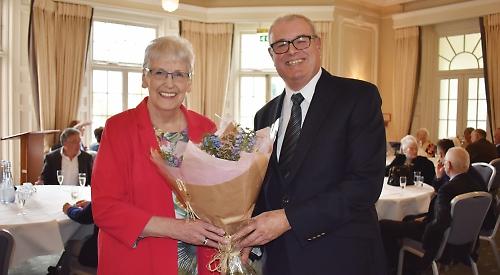 THE clerk for the Henley Municipal Charities is retiring after more than 32 years’ service.

Jean Pickett, 75, of Gravett Close, Henley, will officially leave her role on Sunday.

The charity provides housing for the elderly in Henley, where it owns the almshouses in Church Avenue, Bix and Rotherfield Greys.

Mrs Pickett became the clerk when she also became town clerk in 1985 and it was part of her duties.

She left the town council in 2002 but stayed on in her role with the charities.

In three decades, she has overseen the renovation of the almshouses and the sale of the charities’ stake in the freehold of the Kenton Theatre in New Street.

Mrs Pickett said: “The job has been interesting. I enjoyed knowing all the different residents who have been in and out and all the trustees.

“I wish all the current residents well and thank all the trustees for the contribution to my life and my career. In some ways you are thanking me for a job I did not apply for!”

About 40 people attended a thank-you reception for Mrs Pickett at Phyllis Court Club.

She was accompanied by her daughter Kathryn Neilson and granddaughters Laura Pickett and Jennifer Brooks. Other guests included current and former trustees and residents of the almshouses.

Michael Forsdike, chairman of the trustees, paid tribute to Mrs Pickett. He said: “Thank you for coming on this special day to celebrate the 32 years of work Jean has done for the Henley Municipal Charities.

“She came all those years ago to take the job as clerk to the town council but I’m not sure they told her in the interview she would have to deal with the charities too.

“The job is very different now to the one she took on. Jean has supervised a huge amount of work to the almshouses and brought them up to modern standards.”

The responsibilities of the charities include a continuous programme of refurbishment of the almshouses.

It also includes relief in need, to help those in hardship, the educational charity to support those in pursuit of education, the church charity and the bridge charity.

Mrs Pickett is succeeded by Wendy Bowsher, the former manager of the Kenton Theatre.

She said: “I’m looking forward to it. Henley has always been an important part of my life, being born and bred in the town.

“I’ve always had a love for property and for caring for people so this is a perfect job.”