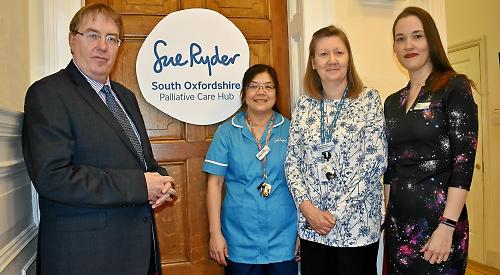 A NEW community care service has been officially launched at the Sue Ryder hospice in Nettlebed.

The charity, which is planning to sell the building, is trialling a new arrangement in which more of its specialist nurses will visit patients at home.

It went live on Monday with the opening of a new phone line to nurses who will provide specialist advice or rapid response care. If a patient being cared for at home wishes to spend their final day or two at the hospice, they can arrange transport.

Henley MP John Howell attended the launch and was given a tour of the hospice before he discussed the new system with senior staff. This offers a single point of access to care for end-of-life patients in conjunction with the 111 urgent care service provided by a Sue Ryder team.

It was devised last year in partnership with the Oxfordshire Clinical Commissioning Group.

The service will initially cover the south-east of the count, including Henley, Sonning Common, Wallingford and Thame but could be rolled out to Faringdon, Wantage, Didcot and Abingdon at a later date.

Sue Ryder says the arrangement will better meet patients’ needs as demand for inpatient care has fallen by 12 per cent since 2014 while demand for nurses to visit patients at home has almost trebled in the same period.

It also says Joyce Grove, a former private residence which the charity has occupied since 1979, is costly to maintain and is increasingly out of step with modern expectations around issues such as accessibility and fire safety.

The outreach service is likely to move to a “community hub” although beds would still be made available in partnership with one or more external providers.

The charity says it wouldn’t want to buy alternative premises but moving to a less remote location would make the service more accessible to more people.

Mr Howell said: “Sue Ryder will hear no argument from me about this sort of model. I fully support it and believe the charity is doing the right thing as the medical profession is moving towards models that integrate social care and medical provision more closely.

“This model, developed with the help of the Royal College of Physicians, will let people live out the rest of their lives at home and ultimately die there if that is their wish. Choice is an important element in so many aspects of medical care so it would be strange if we were to deny this to people nearing the end of their lives.”