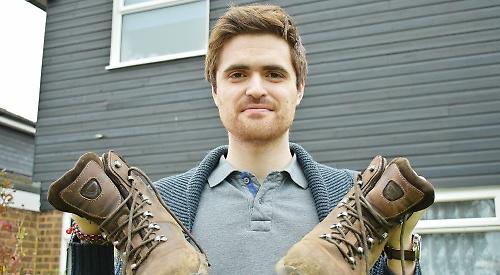 A MAN will attempt to climb Mount Snowdon for charity tomorrow (Saturday) — two years after having his bowel surgically removed.

Kevin Tappern, 31, of Wayside Green, Woodcote, will scale the 3,560ft peak, the tallest in England and Wales, with his brother Steven, 35, and three friends from Reading.

They will follow a 12km circular route via the Pyg Track, a footpath which is one of the least challenging ascents, and hope to reach the summit in six hours, allowing for plenty of rest breaks.

The climbers hope to raise at least £1,000 for Crohn’s and Colitis UK, which raises awareness of the digestive disorders.

Mr Tappern underwent an emergency ileostomy in March 2016 after being diagnosed with ulcerative colitis which had perforated his large intestine.

Surgeons at the Royal Berkshire Hospital in Reading removed the diseased organ and diverted his small intestine through a new opening in his abdomen called a stoma, which drains into a disposable pouch.

The IT technician, who is a keen martial artist, was determined not to let his condition affect him and returned to training a few months later before obtaining his jiu-jitsu black belt.

Mr Tappern, who grew up in Woodcote and attended the village primary school and Langtree School, had suffered from irritable bowel syndrome for about seven years before suddenly falling ill.

He went to his GP with severe stomach pain and loss of appetite, which he was told was a temporary flare-up and was signed off work. However, his symptoms became worse and doctors thought it was an infection so they prescribed antibiotics.

These made little difference and Mr Tappern’s condition deteriorated to the point where he was vomiting, passing blood and going the toilet repeatedly. He became so weak that he struggled to get out of bed.

Eventually his parents Graham and Lorna took him to hospital where tests revealed he had ulcerative colitis, which causes inflammation and ulcers in the digestive tract.

The cause of the condition is not known but in some cases it can be managed with medication. However, Mr Tappern’s condition was so severe that operating was the only choice.

After the surgery, he had to follow a soft, bland diet at first, even though his weight had plummeted from 13st to about 9st 7lb,

Gradually, he was able to eat different foods as he recovered and now his diet is almost normal again, although the must chew everything thoroughly.

Mr Tappern regained his fitness by walking briskly instead of running which was painful on his abdomen. He returned to his weekly jiu-jitsu training in Reading with the aid of a special strap and guard that protects his stoma.

He said: “I was only a few weeks away from grading for my black belt when I became ill.

“It really came out of nowhere and I ended up both malnourished and in an incredible amount of pain so I had to be more or less carried into hospital.

“The recovery was as much a mental process as a physical one. Your body needs two months just to get its energy back after major internal surgery but there’s a lot to come to terms with as well.

“Aesthetically, you’re used to seeing a perfectly able body in the mirror then suddenly having this bag sticking out of your side.

“Some people get a bit of advance notice and can prepare for it mentally but in my case it was very sudden as I’d been absolutely fine just three weeks earlier.

“However, at the end of the day you’ve got no choice but to adapt. I went through a ‘why me’ phase and there are sometimes difficult days but I’ve come to terms with it and things are pretty positive.”

Mr Tappern refused to give up trying to achieve his black belt.

He said: “It was a case of easing myself back into training by taking small steps rather than jumping back in feet first.

“Ironically, it turned out to be a good way of keeping fit because running was too painful whereas the strap allowed me to get hit without hurting.

“I had a pretty brutal day-long assessment where I was being thrown around and throwing other people around.

“I was in tears for an hour or two after getting the result because it was the culmination of something that could so easily have been taken away from me.

“It was proof that I was taking my life back. There was an incredible sense of relief and pride.”

Last year Mr Tappern took part in a 10km group walk around Bristol wearing a Crohn’s and Colitis UK
T-shirt to raise awareness of the charity and afterwards decided he wanted to take on a bigger challenge.

He said: “I didn’t have any difficulty with the walk so I wanted to push my body a bit harder while guilt-tripping some friends into joining me!

“The Snowdon climb won’t be too much longer, although it will be on significantly hillier ground.

“I’m pretty confident that it will be fine as we just have to follow the trail to the summit and back.

“I do a lot of brisk walking as part of my regular exercise so I know I can go the distance. If we get an early start we should be comfortably up and down within the day.

“People have been very encouraging and it will help provide funding towards valuable research.”