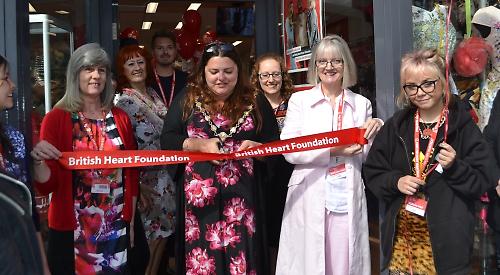 A NEW charity shop has opened in Henley.

The British Heart Foundation has taken on the former home of Henley Studios, in Duke Street, which closed last summer. It becomes the sixth charity shop in the street.

Dozens of people waited outside when the shop was officially opened on Thursday last week by Henley Mayor Kellie Hinton. Area manager Louise Stevens said people had been banging on the shop’s door since they started filling it with stock last month.

She said: “We have been trying to get into Henley for a while and this was a good opportunity for us. I couldn’t be happier with the way the shop has been done up, it’s modern and fresh.

“Almost all the stock is donated and includes clothing, accessories, bric-a-brac, books, board games and toys. We already have some volunteers but we are looking for more.”

The shop will employ two full-time and one part-time member of staff. Donations can be dropped off in the shop or by the back door in Tuns Lane. The charity can also arrange for donations to be collected.

Councillor Hinton said it was good to see another empty shop unit being occupied. She said: “I love a bargain and I’m really excited to see a new charity shop. I know people will say we have however many charity shops but would you really rather have an empty shop?  It gives people a reason to come into town and then they could go in another shop and help support the local economy.”

The other charity shops in Duke Street are Thames Hospice, Sue Ryder, the Oxfam bookshop, Cancer Research UK and Helen and Douglas House.