Teenage hairdresser has locks shaved off and raises £1,350 for charities 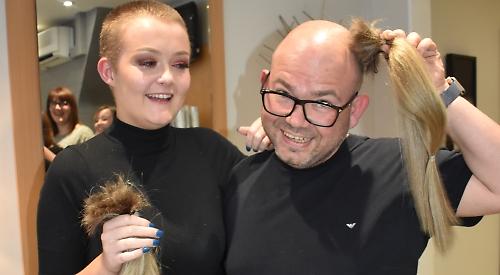 A TEENAGER from Henley had her head shaved to raise money for two charities.

Evie Moore, 16, had her shoulder-length blonde hair cut down to a grade four all over.

She was raising money for Cancer Research UK and has donated her hair to the Little Princess Trust, which provides wigs to children and young adults who have lost their hair due to cancer.

She raised more than £1,350 through online donations and collections in the salon.

Evie said: “I wanted to help and raise awareness of the two charities. I thought that as I worked in a hairdressers it would be a good idea to shave my head. I was quite confident about it and thought it was exciting.”

She worked her normal Saturday shift before fellow staff Jayden Roberts and Steph Grey prepared her hair by washing and straightening it.

Evie’s hair was put into six separate pony tails which Mr Baldassarri removed before he tidied up the rest of her hair.

Evie, who attends the Piggott School in Wargrave, said: “When Alessio started it was quite scary. It became real at that point.

“I was still excited but it was quite shocking because I had never seen myself with short hair. I was speechless for a while. Now I have got more used to it and can’t remember what it was like to have hair. I’m excited to try lots of different hairstyles and dye it different colours.

“I feel really good about what I’ve done.”

Mr Baldassarri, who has run the salon since 2002, said: “I was surprised when Evie said she wanted to do it. I was worried about her hair but she dealt with it pretty well.

“It’s amazing she has been able to raise all that money.”

Mrs Fairbrother, of Norman Avenue, Henley, said: “I think she looks amazing and she has had so many compliments. I am so, so proud of her.”