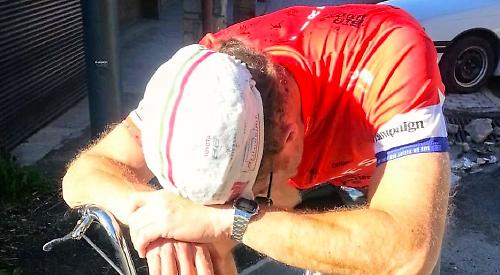 A MAN cycled up a mountain twice in the space of a few hours.

Matt Richardson rode 1,860m up Alpe d’Huez in the French Alps on a Raleigh Chopper, a 1975 children’s bike, in just 76 minutes.

After descending by car, he rode up a second time with his 10-year-old son Felix, both of them on racing bikes.

Mr Richardson, 52, of Deanfield Avenue, Henley, raised more than £1,100 for blood cancer charity Bloodwise in honour of his father David, who died of cancer in 1999.

Mr Richardson, a solicitor, said: “Alpe d’Huez is a legendary Tour de France climb and the scene of many dramatic race finishes.

“It is only 13km long but it is a constant climb to an altitude of 1,860m with an average gradient of 8.1 per cent. This meant my approach to riding it on the Chopper was different.

“I knew I had to attack the steep section at the bottom hard or I would struggle to maintain enough cadence and would be more likely to cramp.

“I hit it hard and was already too short of breath to speak by bend two.

“I needed to drink sips of water straight away, much earlier than I anticipated. Eating any kind of snack was impossible because I was breathing too hard. Most of the two madeleine cakes I tried to swallow ended up on the road.

“When things got really hard at about bend 10 I thought of my father but also my incredible son. His incredible ride up Col de la Croix de Fer will stay with me forever — 22 miles uphill to an altitude of 2,067m with a height gain of 5,700 ft.

“Even after all that he went for a sprint finish at the top!”

After descending, Mr Richardson had breakfast before going back up the mountain with his son. He said: “Although Felix’s bike is slightly heavier than mine, I had to work hard to keep up with him.

“Felix’s time was one hour 30 minutes and anyone who understands cycling will know what an incredible feat that is for a 10-year-old.”

He thanked people who sponsored him, saying: “Every donation makes a real difference to the lives of people suffering from blood cancer and I’m very grateful for any contribution.

“I must also thank Alex Whittenbury and Kamran Richardson without whom I wouldn’t have been able to complete the ride. They gave me water, cake and encouragement all the way up the mountain.”

Mr Richardson has previously ridden a Chopper from London to Paris, up Mont Ventoux in France and the Stelvio Pass in Italy as well as setting a world record for the longest distance covered in an hour on a Chopper when he completed 69 laps of Palmer Park velodrome in Reading.