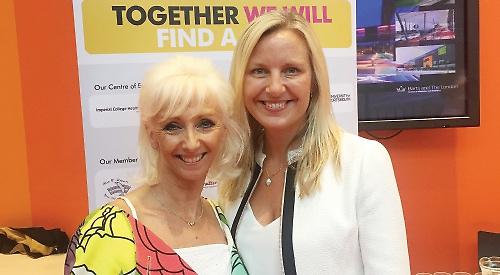 A WOMAN f whose sister had a brain tumour is helping to fund research into the disease.

In recognition of her contribution, Annabel Gallifant was invited by the charity Brain Tumour Research to visit the centre of excellence at Queen Mary University of London to see how her funds contribute to research and meet the scientists.

She was joined by Debbie McGee, from Wargrave, whose husband Paul Daniels died of a brain tumour

Mrs Gallifant, 41, of Deanfield Road, Henley, raised more than £4,700 by taking part in the London Marathon in April.

Her sister Vanessa Fewell, 42, from Kent, was diagnosed with the astrocytoma tumour in 2016.

The mother-of-three underwent surgery, radiotherapy and chemotherapy treatment which finished just before Christmas and she was well enough to spectate in London.

Mrs Gallifant who works for pharmaceutical company Allergan in Marlow said: “Brain tumours are indiscriminate— they can affect anyone at any age.

“They kill more children and adults under the age of 40 than any other cancer, yet just one per cent of the national spend on cancer research has been allocated to this devastating disease.”

To make a donation, visit www.justgiving.com/fundraising/anna-heywood-gallifant