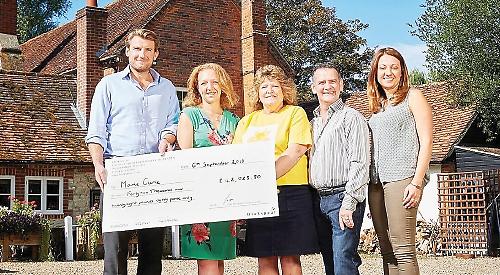 MORE than £42,000 has been raised by Brakspear pubs for Marie Curie in 18 months.

All 130 of the Henley pub operator’s premises in South Oxfordshire and further afield have been raising money since the company entered a partnership with the nursing charity in March last year.

A cheque was presented at the Chequers in Berrick Salome, where landlords Mark and Sandra Duggan raised £3,290, the highest individual pub total.

Many pubs encouraged customers to add a donation when paying their bill. Staff took part in challenges such as the London Marathon and the RideLondon100 cycle race.

The partnership was Brakspear’s second following a similar arrangement with Sue Ryder, which raised £50,983 between November 2015 and February last year.

Chief executive Tom Davies said: “We’re delighted that our pub and head office teams have again risen to the challenge and thrown themselves into fund-raising for Marie Curie.

“Many of our licensees, staff and their customers have been touched by Marie Curie at times of need and were keen to help a charity which, like our pubs, is at the heart of local communities.

“We’re very proud to have collected this sum, which will enable Marie Curie to do more great work helping people living with terminal illnesses and their families.”

Helen Stock, senior partnership manager at Marie Curie, said: “We’re grateful to Brakspear for its fund-raising. Many of its teams put huge time and effort into organising events on top of the demands of running their pubs.

“The money they have raised will help us to care for more people affected by any terminal illness, providing emotional support and expert care to people when they need it most.”

Mr Duggan, who used to run the Three Tuns in Henley, said most of the money raised at his pub came from a garden party with a silent auction and raffle.

He said: “Customers were happy to buy tickets knowing that all proceeds were going to Marie Curie. Everyone knows the wonderful work they do.”