Girls, 7, raise money for Stand Up To Cancer appeal with toy sale 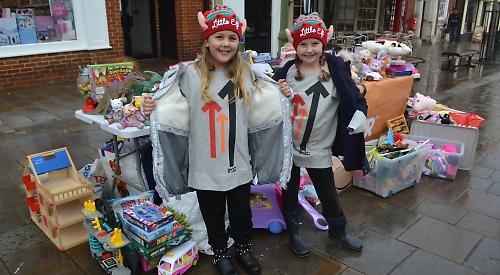 TWO girls raised more than £400 for charity by selling their old toys in Henley market place.

They came up with the idea after watching Channel 4’s Stand Up To Cancer fund-raising appeal in October.

Both girls have family members who have suffered from the disease. Darcy lives in Deanfield Road with her parents Olive, 46, and Chris, 50, while Grace lives in Greys Road with mother Michelle Winters and her partner Peter.

Mrs Kenny, who works at Courtiers in Hart Street, said: “The girls originally wanted to sell loom bands but after watching Stand Up To Cancer they decided they would instead sell their toys. It’s something they feel strongly about.

“When Darcy told me she wanted to sell her toys in the town square I said, ‘you can’t just do that, you have to get permission’.” Darcy wrote to the town council which gave consent so she and Grace then asked their friends at school to donate some of their toys.

The girls ended up with about 300 items to sell, including cuddly toys, plastic dinosaurs, board games and even a doll’s house and a unicorn hobby horse.

They wore Stand Up To Cancer T-shirts at the sale, along with Santa’s elves hats.

Among their customers was Henley Mayor Glen Lambert, who bought a teddy bear which he gave to staff at Lovibonds brewery.

Grace said: “It went really well. I liked it when the Mayor came and we sold him a little teddy bear. We want to stand up to cancer to make it all better. I want to do another sale.”

Darcy added: “We had a good time. Lots of people came up and said nice things to me.”

Mrs Kenny said: “They were given so many toys, it was brilliant. Some were quite unusual and some still had the labels on them. The teddies were the main ones that sold — everyone loves soft toys.”

The sale raised £137 with almost another £300 being donated via a JustGiving page.

The toys that weren’t sold were donated to the Henley Toy Run on Sunday when volunteers on motorbikes will drive donated toys to the Oxford Children’s Hospital.